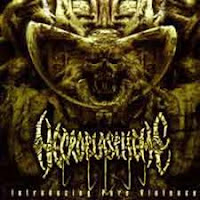 Introducing Pure Violence was another of those cases of going back in time to check out a band's first album when I was already in heat for the sophomore. Really, all I could hope for was a riff strewn, simple effort in the vein of structured, pure death metal that would honor the six year gap between this debut and the later, great Destination: Nulle Part, and I feel to that extent this is a viable, if not wholly impressive offering that exhibits the development of one of the more promising French death metal acts on the current circuit. Riff for riff, they cannot compare to a Yyrkoon, and they do not display the technical efficiency or exploration of an Atrophy, Gorod or Carcariass, but regardless they hammer through a set of nine tracks here that fall only a few leagues short of punishing enthrallment.

To place the band on the spectrum, one might consider early USDM acts like Morbid Angel, Suffocation, Deicide and Malevolent Creation, and then liberally apply a hint of more grinding, European furor from the jaws of 90s Carcass, plus the incessant, intense guttural slobber of early Cryptopsy or Nile style vocals. The compositions are continuously energetic and the production dense and thick, with boxy sounding guitar tone that crunches at the edge enough that it must sound beastly in the live setting. The drums are suitably snappy here, never suffering below the weight of the strings, and the bass is present and pumping through every artery like formaldehyde flooding a corpse. Once in a while, some lower, frog like vocal effects rally at the corner of perception as in "Foetal Bondage Concept".

Tracks like "Sanctified in Nonsense", "Chainsaw Arena" and "Isolating Torture and Torment" all feature faster riffs that sadly feel a little interchangeable, and there's a bit of stop/start to the drums as they shift through dynamics that often feels like as if the songs are just a collection of unrelated riffs being forced into order. But the tone is crushing enough that one can just turn the other way and enjoy the bludgeoning force the band are using to pound phallic nails of aural torture into your cranial cavities. There are a few tunes in which the band simply shines, like the pure old school venom of "Beyond Sodomification" that transforms into huge, driving chords of torment, or the closer "Kill on Sight" which succeeds despite throwing in a large number of cliches like guitar squeals and mosh sequences, partly due to the great, evil dark ambient outro tacked on the end.

One could never accuse Introducing Pure Violence of false marketing, because that's exactly what the French have in store for anyone spinning the disc. It's a shambling behemoth of brutality, reined in by simpler riffs that aren't quite so thrilling as those found on its younger sibling. The band is not so thematically experimental as its peers, nor are the riffs even hinting at innovation or indulgent technicality, but for a debut it passes muster on the force of its attack alone, and the hungry and welcome tone through which it delivers the beating.