Children of Technology - It's Time to Face the Doomsday (2010) 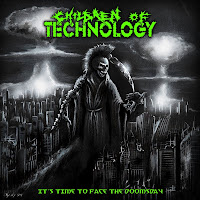 Splayed out in leather, bullet belts, mohawks, mutton chops, vests, and more patches than you'd find at an open air headbanger festival, the Children of Technology cut a pretty unusual figure on the Italian scene. We've come to know the place for symphonic and progressive metal, with black and death scenes developing, but a nuclear splatter crossover band? That's news. Well, this unit have been busy in the past few years since their 2007 inception, producing a number of splits and singles, and it was only time until their novelty caught some attention, enabling them to release their full-length debut It's Time to Face the Doomsday on CD through Hell's Headbangers. To say that they belong on such a roster is merely an understatement, because there is really nothing about this record that reeks of anything post 1987...

Children of Technology do not hide their influences, in fact they tout them rather openly. The music is a mix of old school punk/hardcore and thrash, placing them somewhere among the rank and file of Discharge, (early) Corrosion of Conformity, Cro-Mags, D.R.I., The Accüsed, The Exploited, and Cryptic Slaughter. DeathLord Astolfi's vocals sound like a chain smoker with gravel down his throat, and I am reminded of both Snake's work on the early Voivod albums, and Chris Notaro from the cult legend Crumbsuckers' debut, Life of Dreams. This is a fairly difficult style to pull off, not because of any implicit complexity in the writing or performance, but to actually write songs that feel somewhat more than mere derivations of the many acts preceding them in the constituent genres. To this extent, I feel the Italians have at least succeeded where many others do not.

"New Enemies to Hunt" provides a nuclear inauguration, crass punk rhythms and gang shouts aplomb after the rock and roll setup, and you'll notice that the Children don't exactly rush through their material. This is one of the shorter tracks on the album at 2:43, about double the length written by many such acts, so there's something more substantial about it. They don't exactly front load the stronger songs though, and "It's Time to Face the Doomsday" and "No Man's Land" waltz by like toxic punks inhaling spray paint before we finally get to some more ass kicking riffs in the "Symptom of the Universe"-like "Racing Through the Valley of Death", the frenzied "No Fuel...No Hope!", the hardcore Armageddon of "Escape from the Danger Zone" and moodily introduced "Screams from the Earth", which summoned up delightful memories of the old Voivod albums I used to headbang through while my balls were still dropping.

As a definitive statement of European splatter punk thrash, It's Time to Face the Doomsday is more than adequate, though the initial few tracks are rather weak on the riffing, and there is nothing so atmospheric here beyond a nuclear strike siren or the propulsion of the band itself. Half of me feels like there is not a lot of room in crossover to innovate, but the other half reminds me that most bands don't even try. Children of Technology aren't writing outside of their major influences, and if anything, they play it rather safe. This is the kind of band I'd like to hear filthier, messier, and far more radioactive as they sing anthems to the end times and beyond, wasteland mutants hurling empty liquor bottles at graffiti strewn walls as they cook their enemies in oil drums for consumption. Considering the relatively young age of the project, I get the feeling there is plenty of room yet to carve out their place in the apocalypse.