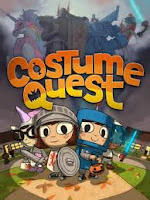 Costume Quest is an adorable and genuinely funny spin on the traditional RPG, made manifest by Tasha Harris of Double Fine Productions, which as many might know is the development studio of Tim Schaefer, legendary game writer behind Psychonauts, Grim Fandango, Full Throttle, and several of the Monkey Island titles. Since the studio's last major console title Brütal Legend was more or less a flop (an underwhelming experience in my opinion), Double Fine decided to split into a quartet of smaller development teams, each working on a DLC title, and this is the first of these to see the light of day. The game is available on both XBox Live and PSN, and the version I'm reviewing here is that of the latter.

First off, I'd like to state that this is primarily a game geared towards younger players, which should be obvious from the art style. However, much of the humor and several of the references are also targeted at adults, and the very design of Costume Quest itself should be of interest to RPG afficionados, because it's quite wonderful. The urban, stylized RPG is not necessarily novel to consoles, not since Earthbound or Pokémon, but in truth, the setting here has a flavor far more reminiscent of the Penny Arcade: On the Rain-Slicked Precipice of Darkness titles, with a dash of Psychonauts thrown in to the character designs. At the start, you select one of two siblings to play, Wren or Reynold, but the story deviates little aside from the text. You advance through the plot by performing quests, collecting various cards and candies, and doing battle with adorable beasties like Grubbins and Crestwailers, and a few bosses.

Fetch quests are a bane to some, but personally I found that it was simple enough to collect the various costume parts and cards, especially since the dialog in between is such a treat (pun intended). These are truly humorous characters well above their years, and the incorporation of robots, witches, mummies, ninjas and pirates are all bound to invoke nostalgia for both the player's childhood and the many vapid internet memes they've likely encountered. It's important to remain vigilant about what powers each costume provides for you, and also to the environment in each of the three game areas, because there are a few hidden bits that might seem perplexing until you've had a good look around. Then again, I rather appreciate that the game wasn't some 100% pushover, though it's far easier than most RPGs and there are no options to increase the level of difficulty.

Speaking of which, combat here flows pretty freely, with each of your party members essentially becoming a giant-sized version of the current costume he/she is wearing. You'll only get three at most in your party, so the battles are relatively small scale. You have a basic choice of attacking or using a charge up move (every few combat turns), or using an active ability from a Battle Stamp that you've collected. Most of the fights are similar, and once you've equipped the cards and costumes you are most comfortable with, it's not exactly rocket science to succeed. The game also becomes notably easier when you've got the third party member. Most of the costumes are adorable, so it's worth the time to put them all together (even the 1-2 optional suits) and mess with their abilities. Boss fights are slightly more complex but there are not a lot of tactics, so at most you'll possibly fail 1-2 shots before figuring it out. 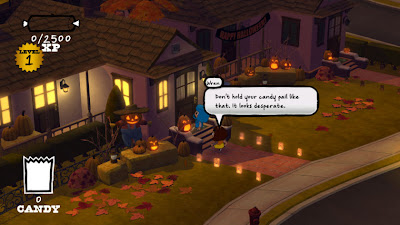 I've seen a lot of complaints that the mechanics in Costume Quest are dated, the battle system too simple, but it's important to keep in mind that most of these hail from jaded console gamers who salivate over each new Halo or Grand Theft Auto installment released. I found none of their quips to be an obstacle to my own personal enjoyment. The game auto-saves you in certain places, which has dismayed a number of players, since you can't actually save after each battle, but the auto-saves are close enough together (as in, almost every event or upgrade throughout) that they were never an issue for me, and who cares? As for the difficulty, this is primarily a seasonal game for children. Creating headaches for the hardcore enthusiast was likely not at the top of Double Fine's 'to do' list. The only gripe I could make about the title is that the goals in each of the three areas were too similar (same amount of apple bobs to win the grand prize, same amount of kids playing hide & seek, etc.), but this also warmly allows the casual player to have some idea of what to expect instead of keeping them on their toes.

In the end, I had a blast with the game, and for what I paid ($15) the 4-6 hours I spent with it were well worth the investment. The story itself is rather shallow, but the clever interactions between the major and minor characters more than compensated for it, as did the interesting means through which the RPG conventions were applied to the idyllic suburban setting. Just don't go into this expecting some Bioware level of complexity, lighten up and enjoy the ride, and you'll find yourself immersed in one of the cuter and most unique gaming experiences of late, regardless of your age.