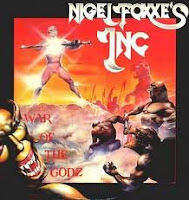 By the time Nigel Foxxe's Inc. arrived in the late 80s, the man himself had already been quite busy within the thinly developing Greek speed/thrash scene, performing guitars and vocals on the first two albums by the vicious Flames, Made in Hell ('85) and Merciless Slaughter ('86). These showed tremendous potential, essentially that country's answer to a Bulldozer or Venom, but there was some restlessness within the frontman, and he parted to form his own entity in Thanatos Inc., producing the single album Life Ltd. in 1987. This was not a huge success, and unfortunately due to a conflict with the Dutch Thanatos, Nigel was forced to change the name, which he did to incorporate his own handle.

War of the Godz was the initial result of this new stage in evolution, and here Foxxe would infuse a more brightened luster of speed/power metal into the obvious thrash influences. Don't be mistaken, this is in part as aggressive as his Flames records, but it manifests this unusual mix of early Slayer, Dark Angel or Venom with the stylings of USPM artists like Agent Steel or Liege Lord. Add in some lovable if cheesy keyboard intros and you've got yourself a rather forgotten 'epic' of Greek speed metal that was sadly another victim of the metallic saturation of the late 80s, through no major fault of its own.

Granted, this is not exactly laden with the most mesmerizing riffs of its time, most fluttering past in a blitz of abandonment, content in their energies alone. Foxxe's vocals run in a mid to high range that almost remind me of some blue collar NWOBHM vocalist trying to keep up with the faster pacing of the thrash/speed epoch, but they're also functional and fluid enough that he could pull them off while sputtering his lead and rhythm guitars. His backing band, 'Wolf' and Johnny were quite tight, in particular Wolf's bass is quite busy throughout the album and only adds to the entertainment value. The production is not a far cry from most of the speed or power metal acts on the Metal Blade roster in the mid-80s, which is to say you'll like it if you were listening to the genres back then. If not, there could be a disconnect.

The record begins with the "War of the Godz" trilogy, each of which opens with some tasty, lush if primitive keyboard melody that erupts into speed metal, like Tangerine Dream opening up for Hobbs' Angel of Death. Of the three, "Avengin' Godz" and "Universe of Fear/Galaxy of Terror" have the most thrust to them, and probably the most power on the entire album, as if they were plucked from Foxxe's earlier albums with Flames but polished to be something less severe. "Treason" is a 9 minute epic with synths and acoustic guitars that explode into more mid paced material that reminds me of Omen or Manilla Road, Nigel putting an edge to his vocals that simply wasn't present for the trilogy.

This might be the centerpiece of the album, but then the trio notches out two more 8 minute pieces in "Condemend" and "Pet" that are both rife with somewhat digestible melodic guitar licks and progressive sequences. There's one more scorcher in "Fear" which bears a likeness to the "War of the Godz" tracks, and a furious bonus track called "Do or Die" included with the cassette, another flurry of California-craving power/speed metal which recounts Agent Steel or maybe Abattoir, though Foxxe's vocals are nowhere up to the task of a John Cyris or Steve Gaines.

War of the Godz is not exactly the bee's knees, but it does gush honey. The album was passable for its day, and presents enough nostalgia and quality for those who pine for better years when rapid fire metal was just coming out of its infant period, and developing through lyrical ideas and across a broader world stage. The performances are solid and the material trumps the band's sole release through the previous incarnation Thanatos Inc., but there are simply too few riffs that pass straight through the memory, even if they're entertaining in the moment. Obscurity pundits who dig the mid 80s production values and blinding speed will almost certainly find something here to relate to, even if there are no grand chorus parts to memorize or top flight riffs to drool over.