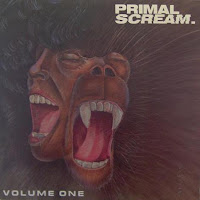 Snugged up firmly against the embankments of gutsy East Coast thrash, Primal Scream were yet another of those many lost voices of promise that once speckled the seaboard like hairy gorilla gangs, alongside Gothic Slam, Savage Thrust, Demolition Hammer, Wargasm and Indestroy, with a beef injected approach much manlier than an Anthrax or Overkill, though perhaps not so explosive or expressive in delivery. But their sole official offering Volume One has a certain, undying character to it, through the run and gun, boxy guitar tones, assertive production standards, classic riffing foundations (Metallica, Hallows Eve, etc.) or even the slightly crossover appeal the band often skirts, in particular the vocals circa Cro-Mags, D.R.I. and so forth.

Ultimately, Volume One is the sort of thrash record you break out from time to time when you just want something other than the legends who occupy most of your attention span. There are few if any songs here that will hold onto your cranial lobes forever, but if you seek something refreshingly niche and still sounding like it just rolled out of the garage with a fresh layer of paint, you could do a lot worse. "War and Sin" recalls the hardcore rage of a Crumbsuckers meets S.O.D., while "Last Breath" builds this slowly grooving, bass-driven atmosphere, bluesy guitars wailing off until the butcher arrives with the big riffing bill. There are a few tasty speedsters like "Poisoned" and "Mr. McCreedy", but the band never sticks to a single tempo, so you have a nifty variety that holds your attention despite the primordial feel of the riffs. I wouldn't describe the material as particularly strong, but it is particularly fun, like taking a tire iron to your most hated neighbor's property while you're mad on beer suds.

The vocals here were offered by drummer Steve Alliano and bassist Rob Graham, and they mix up crude masculine barking, gang shouts and something more decrepit, like a mad mortician. Occasionally, as with "Ignorance is No Excuse" or the weak higher pitched vocals of "Kill the Light", it doesn't quite come together, but even here the pure steel honesty of the rhythm guitars prevents the material from becoming a train wreck. Leads are heavily blues based, some simple and easily improvised, some showing a little more spunk. I guess if D.R.I., Motorhead and Metallica circa 1983 had a jam session it might turn out something like Volume One. That looks amazing on paper, and it's not bad on record, but how much value you'll derive from its nostalgic, bruised siren call will depend on just how willing you are to overlook the relative lack of intricacy and originality when there were (and still are) so many better superior options in this genre.