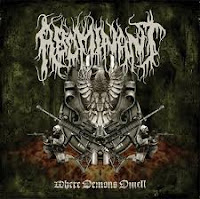 There is always something to be said for persistence, and perhaps Abominant are one of our most stalwart American lessons in this virtue, having released nine full-length albums, all but hidden from mainstream recognition, offering nothing more than the purest of death metal aesthetics that conjure up the Florida blasting of a Morbid Angel or Malevolent Creation, with a tinge of the good old Dutch style of Sinister and Pestilence. At times, I feel like they're a poor man's Hate Eternal, but predating that Erik Rutan vehicle and catapulting through a wider range of storming dynamics.

Granted, the few efforts I've heard from this Kentucky outfit have hardly been distinct, but perhaps Where Demons Dwell serves as the proper catalyst to a re-evaluation of the veterans' backlog, because this is a well-written, mature album that clenches the attention span through most of its eight compositions. It opens with "Baptized by Steel", a blazing piece which exchanges Morbid Angel like blasting for a pretty smooth, downtrodden breakdown and escalating groove that would have a crowd turn wild, though I wouldn't call this the highlight of the album. "Bloodland" offers some more uplifting, streaming guitars that are instantly more catchy, and the thrash breakdown is quite good, while "Firestorm" is one of the better sheer onslaughts on the album, the celerity of its primal grinding enhanced by a simple but entrancing half-melody and another of the band's characteristic breakdowns that waltzes between early 90s Pestilence and Ripping Corpse.

"Rain of Ash" offers more ritual speed, the chords of the initial charge casting a ghastly old flavor soon eclipsed by the band's venomous adherence to raving lunacy, and right when you thought another blitz would taint the album monotonous, they slow to a dreary crawl through the opening moments of "After the Fallout", holding off the blasted tendency until the mid point. "The Wolves of Hate" and "Blackened Earth" both return to the frenzied pacing, but both are complete with quality riffing and a forceful veneer that proclaims Abominant was not born yesterday and might damn well outlive even the damned cockroaches in the end times. Speaking of end times, Where Demons Dwell closes with its title track, a ripping infernal holocaust that yet again visits that delightful old Pestilence churning as it bursts through the crust of purgatory. More of the thrashing breakdowns cede to a rather unexpected, melodic muting sequence deep in the track that truly wraps the experience, making it another of the album's best.

Nothing could be sweeter than hearing a veteran band like this, far off the radars of most of the Nile, Suffocation and Cannibal Corpse worshiping death metal flock, create one of their most enduring pieces, and their long relationship with Deathgasm Records (sixth album through the label) seems to have paid off. I won't promise you that Abominant are technically explosive, unerringly brutal, or even mildly innovative; or that Where Demons Dwell is bound to achieve cult classic status, but there is no questioning the time and care placed in it, seasoned dynamics and willingness to explore and expand the typical blasting motif when the song itself calls for a deeper layer of disturbed consciousness. An American band, performing 90s style death metal without any trace of trendiness or bullshit: you could do a lot worse than this album.