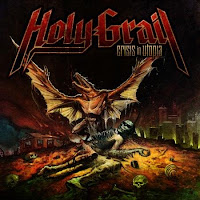 Holy Grail is a Californian band, the product of three former White Wizzard members who went their separate ways. They also have the distinction of being one of a few bands on the Prosthetic roster who don't perform the trendy metalcore I often associate with the label. Speaking of trends, you might expect that this band would attempt to jump on that same retro heavy metal bandwagon that has taken off these past few years, akin to their mediocre alma mater White Wizzard, but I'm happy to say that this isn't really the case. Surely, Holy Grail carry those influences, but there is a prevalent leaning here towards the modern power metal ethics present in bands like HammerFall, Firewind and Dragonforce, though never so blisteringly fast or indulgent as that third name.

Crisis in Utopia is their first full-length, following and incorporating their Improper Burial EP from last year, and though it didn't leave a huge impression upon me, there is no denying the talents at the band's disposal. Flighty, acrobatic riffing rules the day, courtesy of Eli Santana and James J LaRue, whether they're busting out rabid leads or fairly complex rhythms that blend a heavily European power subtext with the precision of old US acts like Omen or Helstar. The rhythm section of Blake Mount and Tyler Meahl is taut and impressive, and James Paul Luna has a beautiful range, crystalline and soaring as he executes each verse and chorus line. The production here is top notch, polished down to the accessibility shared by so much of this genre, never looking back for raw nostalgia.

The album also opens with its arguably strongest number, "My Last Attack", which instantly craves attention with the screaming intensity of its verses and happy go lucky power metal momentum that is cut through by delicious, technical guitar fills, dual melodies and an overall, uplifting propulsion. It hooks you from the start, and then doesn't let you go through the surge of "Fight to Kill", one of the tracks revisited from the 2009 EP. The chorus here isn't all that impressive, but the guitars rage through the composition, too clever and balanced to trip over themselves while Luna is screeching over them like a steel bird of prey. Unfortunately, this is the first point on the album at which the band decides to incorporate a little errant melodeath or metalcore snarling beyond the bridge, something that simply is not and never will be necessary within this band.

Granted, it's in small supply here, peppered in just a few tracks, like "Crisis in Utopia" where it's clearly being used in total metalcore fashion common to other Prosthetic bands (like All That Remains' breakdowns). Minor, but it's like finding a thick, unidentified hair in your porridge: you might still enjoy the dish, but your satiation will be tarnished nonetheless. Better to ignore these unfortunate lapses and concentrate on the better bulk of the album, like the choppy and hammering of "The Blackest Night", intense shredding rhythms of "Cherish Disdain" (ignore the harsh screams there too)" or the sorrowful, driving power of "Requiem". Not a lot of the material sticks to the soul. It's melodic, aggressive and precise, but drips off the body like rain, never quite sinking its pterodactyl talons into the flesh, despite a valiant effort.

It's impossible to ignore the appreciable level of tactics mustered by Holy Grail here, and I would gladly take this over the more traditional, less impressive works of North American acts like White Wizzard, Cauldron, or the awful 3 Inches of Blood (who possess a more balanced mixture of the power and extreme metal relish that Holy Grail only hint at). The professional production values and proficiency of the musicians should go a long way towards gaining them some ground with a wide audience, but most of the better songs are the sort that simply dazzle without depth, shine without submerging the listener into a repetitious cycle of 'press play' lust. Nothing registers beyond the surface, but it's certainly a wild ride across that surface, and we'll undoubtedly be hearing more from them in the future.