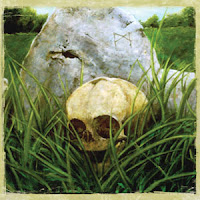 So, if a picture is worth a thousand words, I rather like the picture Vex puts out there on the cover to their full-length Thanatopsis. A skull, yellowed in decay, sitting before an old rock with what appears to be a rune carved upon its archaic surface. I like to think these two inanimate objects hold conversations with one another...certainly the cranium looks happy, as if the tall, grassy leaves were tickling it in the wind. That said, it doesn't offer even a hint of what the actual music will sound like, so when you begin to listen to the album, you might be quite surprised to discover that Vex are some long obscured treasure of progressive, moody melodic death/black/thrash metal that seems rather uncanny hailing from Texas, one of the brutal death capitals of the States.

Yes, there is something understated and atypical about Thanatopsis, though the individual components are hardly unique: well plucked, darkly twined melodic rhythms racing across a tinny backdrop of drums. Blunt and bloodied vocals. Thrashing, warlike bursts of muted thrash chords that soon surge into ghastly death metal sequences. An atmospheric sheen to some of the better guitars that becomes mildly reminiscent of Swedish melodic death or black metal acts. Most importantly, though, Vex understand how to cycle through interesting riffs that complement the grim but uplifting pallor of the album packaging. They don't always strike gold with every pattern of notes, but for a band to encapsulate such a pure atmosphere straight through the core instrumentation is an ability to envy, and this is one of those albums where a band chops up a bunch of constituent elements like vegetables, throws them into the same side dish, and comes out with something fresh tasting.

There are seven tracks here, beginning with the band's namesake "Thanatopsis", which might mislead the listener into thinking the band is instrumental, since a 6 minute composition with few leads or solos and no vocals is hardly common. To compensate, it is one of the most meandering of the experiences here, with clear elements of progressive influence in the bass lines. Better yet is "Eyes of Wrath", teasing with a surge of melodic black metal before it levels off into somber, engrossing riffs, prominent and interesting bass work, and dour vocals. "Era of Delusion" arrives like a beautiful mix of Night in Gales or Dark Tranquillity styled death metal, every riff worth hearing despite the rather desperate and downtrodden emotions inspired; "Apocalyptic Dream" transforms from warlike Metallica thrash chugging to an almost Viking swagger that recalls old Unleashed. The eight minute finale "The Past is Frozen" is loaded with lavish yet sparse, clean guitar sequences through which heavier riffs often cascade, and though it does at times feel the most scattershot of the pieces, it's one of the most intriguing.

Thanatopsis is not always the smoothest of rides, and at times some of the transitions feel like the band are attempting to branch into too diverse of a sound all at once; as if a few riffs were latched onto to others where it doesn't best serve the whole of the songs. However, the majority of the individual guitars are promising, and overall, I really like the vibe the band are churning out, more sobering than blazing, borne more of focus than virtuosity. Vex have been around for 12 years, so one can't exactly call them new kids on the block, though their prior output was limited to a small series of demos and a recent split with local Texas death/doom act Divine Eve, but there is something about this debut that I think might appeal to fans of other moody US beasts like Cobalt, Wolves in the Throne Room, or Agalloch, even though the styles do not always match up (Vex is also less boring in general). Here we've got something well off the beaten path, even though the stones paving said path have been lifted from more frequently traveled concourses.