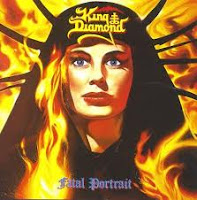 Kim Petersen (aka King Diamond) must be one of the hardest working men in all of the metal realm, or at least he was from the late 70s through the beginning of the 21st century. When his alma mater Mercyful Fate first broke up, our favorite falsetto rigorously pursued his dreams into a new solo project, and the initial body of work encompassing the first five albums from 1986-1990 is essential listening for anyone that can get past the obvious hurdle of all that damned screaming. Yes, five consecutive years, five consecutive efforts that ranged from flawless (i.e. Abigail, The Eye) to just being damned awesome, all beginning with this debut Fatal Portrait, a wondrous indoctrination into King's classy horror themes and night bathed landscapes of gleaming melody.

Petersen was followed into this new project by Michael Denner and Timi Hansen, so the trio already had an extremely solid foundation to work with, made complete with the addition of budding newcomers Andy la Rocque and Mikkey Dee. The tricky bit was writing material that could distinguish itself from the legend of Mercyful Fate, and I feel like this mission was accomplished early with the debut. Sure, you can hear a little of the groove and swagger of the Danish mainstays, but the unified concept (for half the record) and haunted house vibes were new, and I feel like the actual guitar lines had a lot more memorable, and I daresay accessible material to offer the fan of traditional power/speed metal. In fact, I'll go as far to say that I actually prefer King Diamond to Mercyful Fate overall: the former is responsible for a far more impressive, consistent body of work than the latter (excepting a few albums like The Graveyard or The Puppet Master), and while I certainly worship Don't Break the Oath for the masterpiece it is, few things can touch Kim's 1986-1990 creative spurt. Was the man possessed?

As I hinted at, five of the tracks here represent a conceptual horror story, that of a dysfunctional mother who locks her young daughter in her attic, only to be haunted by her ghost through a painting of said offspring above the fireplace. You can probably guess what happens after this, but it's really not all that essential, because you'll be too enthralled with the music to really care about the underlying messages of King's 'narrator' character. The man rises and plummets his enchanting, high pitched screams through the epic opener "The Candle", which is initiated by some amazing atmospheric pipe organs and then cast intro cruise mode with a sorrowful, but badass melodic intercourse. This is followed by the doomed taint of "The Jonah", which one might envision as some delicious, bastard mesh of Mercyful Fate and early Candlemass. "The Portrait" rips along with glistening leads and cautionary, climaxing verses over which Petersen's voice crests majestically, and "Dressed in White" persists with surprisingly warm tones and some of the best, flowing melodic mute rhythms outside of Iron Maiden. The Fatal Portrait sequence is closed by "Haunted", which arrives at the end of the album, with some unsurprisingly great riffs and solid bass work from Hansen.

Outside of the story itself, there are four tracks (not counting the bonus of "The Lake", which I covered in my review of The Dark Sides compilation EP). "Charon" offers perhaps the most easily accessible, killer verse rhythm on the album, minute melodic fills riding the cycles, a fine and fitting tribute to the grim ferryman. "Lurking in the Dark" cultivates into a crystalline vocal arch that I find unforgettable, despite this being my least favorite track on the album, and "Halloween" is tongue in cheek hilarity glazing another slew of great guitar rhythms and thick bass. It's all too perfect that the King offer up a tribute to his (and everyone's, really) favorite holiday, because he so embodies the cliches and spirit of the season), but for the record, he also hits up Christmas (the remastered CD also includes a bonus of "No Presents for Christmas"). The one other track here is "Voices from the Past", a brief instrumental with surging, shuffling guitars that start and stop to various, spooky ringing pianos and other creepiness.

I don't know that I'd consider this one of Diamond's utmost masterworks, but only relative to the followup Abigail or the impressive, underrated witch-burning epic The Eye. If you were to compare it to anything post-1990, though, Fatal Portrait is godlike, and a cause to celebrate the fact that the King was not going to suck outside of Mercyful Fate. Production-wise, the vocals on the original mix are quite loud, and perhaps the rhythm guitars just a tad soft, though still graceful and audible enough to make out. The drums, leads, bass and synth line are all quite impressive, though, and the mix sounds very standard for its day and age, which is to say, it still rules today on any stereo you play it. A few of the songs fall just a fraction below others in terms of overall quality, but it's a safe bet for any fan of Fate or 80s melodic power, speed or heavy metal that doesn't immediately cringe at the Petersen's soaring pitch, and after the staring, striking visage that adorns its cover, I doubt I could ever look at a family portrait the same way again...good thing we've got Facebook instead?!