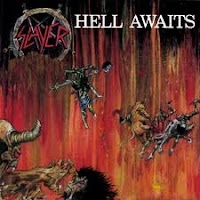 Slayer's sophomore Hell Awaits holds a number of memories for me, both chilling and comic, because it was one of those rare albums that experienced a sort of 'urban legend' cult status in my middle school years. Several peers and I once passed a cassette recording of both this and Show No Mercy around to one another, terrified of its contents, perhaps clinging to those vestigial traces of Christian upbringing. Copies were confiscated by teachers and parents, and a few of us got a good 'talking to', myself in particular, for spreading the twisted diocese of Satan through the rank and file of the innocent.

Keep in mind that I was about 11-12 years old at this time, the target of crass, ignorant exaggerations by a Protestant flock, and by no means in thrall of the Prince of Hell. But the damage was done. I bought the actual cassette. My parents took it away. I stole it back. The top of the refrigerator was hardly a sufficient hiding place for my 'unapproved' stock of metal albums. They gave up. I bought the back patch, and was so armored the very day I parted ways from the Protestant faith (after being forced up through Confirmation prep class as an obligation). What an ironic portrait, a dorky pre-teen armed in denim and devils, striding proudly through a dull spring rain in 1986, having quit Church forever, wearing this image and title on my back. The prescient, magic 8-ball might read that my outlook was not so good.

Alas, our figures of social authority had one thing right: Hell Awaits was one scary fucking record, especially when unleashed upon an audience whose idea of extreme was Dee Snider wearing blush and mascara. Granted, we had Welcome to Hell and Number of the Beast floating around by this time, but Slayer took this concept to an entirely new plateau, not only because of the lyrical content, but the cruelty of the riffs here that jettisoned the simplistic, scathing roots of Show No Mercy into an even sharper blade of menace and perdition. The songs were longer, more fleshed out, more 'mature', yet the blinding speed remained: Hanneman and King a pair of unstoppable ghouls cycling through a rogues gallery of bloodstained, fire-hardened riffs that would cement their stature as gods of diabolic thrash; Araya settling more into his distinct mid range, with nary a shriek to be experienced in most of the vocal passages; Lombardo breeding an entire new school of drummers that would follow his extremity into darker, restless climes.

What better a herald to the fiery paths than a bath of feedback and cacodaemons exclaiming 'Join us' in reverse? Such is the de-Christening of "Hell Awaits" itself, the gallant vanguard that slowly and steadily escalated its warlike veneer into plodding, dire thrash, with that legendary ascent from conflagration at around 2:20. You are now at war, children, and Satan is your general. Let him ride upon your backs and piss upon the clouds of the Holy Host. But as charming a setup as this is, nothing, and I mean nothing can prepare one for the voracious evil that is "Kill Again", one of my personal favorite Slayer tracks, the perfunctory serial killer anthem that had to be one of the most bitter and extreme metal tunes I had heard for its day, once more incorporating Lombardo's warlike percussion into a salvo of beautifully belligerent riffs that seem to incite violence with their very notation, the chorus an unforgettably babbled hymn to atrocity:

No apparent motive, just kill and kill again
Survive my brutal thrashing, I'll hunt you till the end
My life's a constant battle, the rage of many men, homicidal maniac!

So how do you follow up a celebration of murder? How about with some fucking vampires? "At Dawn They Sleep" opens with a horrific bristling spike of carnal melody before it transforms into another of the band's undying, gibbering chorus sequences that seems to mock the listener through its cacophonous glee. These three tracks alone would place Hell Awaits fork and horns above most thrash/speed metal histories, but Slayer were not finished with us yet, launching into the barbaric "Praise of Death" which serves as a sinister foreshadowing to the rampant, uncaring speed of their following masterpiece Reign in Blood. "Necrophiliac" is one of the best known songs from this album for a reason, it's rapid fire perversity transforming a sadistic and 'immoral' fetish into an act of glory worthy of any crude Colosseum, the crowd of sinners turning their thumbs proudly to herald the fused fornication of the living and the dead.

Beyond this festering folly, we are led to what I might argue is the most unsung anti-hero of this record, "Crypts of Eternity", which opens with about a minutes of blistering, spiny necromantic guitars before it rolls into the verse and chorus, and an amazingly despotic bridge section that once more teases at what Slayer will produce in the following year, a turbulent breakdown festooned in a blaze of percussive exorcism. Lastly comes "Hardening of the Arteries", one of the album's faster pieces that strikes like a scourge or cat o' nine tails along the bared skin of the penitent with its apocalyptic poetics. While it certainly belongs here among this wretched flock, it is perhaps the one song here I don't think is perfect: for all the accoutrement of anguish created in the warlike, hammering finale, I found myself mildly disinterested.

Slayer's sophomore was not only proof of the band's persistence, that they were no one trick pony with the masterful Show No Mercy, but it also remains one of the band's nearest flirtations with perfection, surpassed only by its closest brethren in bedlam. The album is not so fixed and fluid as its untarnished successor, but it's nearly as bewitching in the consistency of themes and the composition. There is nothing clean or polished about Hell Awaits, no salvation at the end of its corridor of sinful flesh, and it's a worthy archetype for some of the most demented extreme metal to have been produced since, an absolute necessity for any fan of speed, thrash, black or death metal that values the cautionary discomfort of unbridled anger and passion.