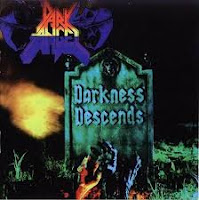 1986 was obviously an enormous year for metal music, thrash in particular, with monoliths like Master of Puppets and Reign in Blood collecting and consuming an eager audience like Martian tripods attacking the California landscape. The time was right to strike. The crowds wanted blood with their speed. They wanted crunch. They wanted unshakable violence, raw spectators of gladiatorial combat, and the Golden State was one of the first to heed the call, going on to spawn an enormous number of memorable bands like Sadus, Testament, Vio-Lence, Death Angel, Forbidden, and so forth in the span of only a few years. But one name stands as releasing perhaps the most extreme, intense thrash metal album of its generation, giving even Slayer a run for their money, and that name is Dark Angel, whose second full-length and Combat debut Darkness Descends sends shivers down even the most rugged thrasher's posterior.

This album was important for a number of reasons, not the least of which is the emergence of Gene Hoglan as one of the prominent percussion forces in extreme metal. His rampant footwork and consistent bludgeoning are one of the most memorable characteristics here, upping the ante for thrash drummers everywhere as they had their heads spun off their necks in the destructive aftermath. By today's standards, in which the death and black genres have stolen metal music off to the coldest and most unfeeling, mechanistic of climates, this performance might seem like old hat, but for 1986 it was unbelievable, making even Dave Lombardo blink twice. Marrying this concrete precision shit storm was one of the more blazing guitar duos in the US, Eric Meyer and Jim Durkin, who decided that the best approach to writing was throwing everything, including the kitchen sink, directly into your face. Each of the seven compositions here cycles through a good number of cocaine rodeo riff assaults that almost unanimously deliver the ominous environs promised by the iconic cover image.

I can't promise that every one of these riffs sticks, and surely this is one of the few shortcomings of the album that would hold it back from the attention whoring of a Slayer, Megadeth or Metallica, but they are at least effective as a whole. "The Burning of Sodom" is generally cited as the favorite here, and this is an understandable sentiment, because Don Doty's normally pinched vocal aggression takes a spin for a slightly higher pitched, punk/crossover approach which is ironically much closer to his replacement Ron Rinehart (on the subsequent Leave Scars and Time Does Not Heal albums), and the guitars race and crash through a number of bombastic blitzkriegs and chaotic solo splices. However, my own personal preference lies for a number of other pieces, including "Darkness Descends" itself, which heralds its approach with scorching feedback and a biting, apocalyptic belligerence; "Hunger of the Undead", which sounds like Sadus and Nuclear Assault jamming together during a zombie revolt; and "Merciless Death", in which bassist Rob Yahn gets to show off a little in the intro before being smothered in bristling speed/thrash metal.

Doty's vocals were not always on point with me, but I will admit that he, like early Tom Araya, was exemplary at knowing precisely where to lay into a scream. The catty, grating voice he would normally hurl out across the energetic mesh of guitars would occasionally feel too light-hearted for the music, despite the blasphemy and gravitas of the lyrics, but there are certainly a number of lines where he's alight with the blistering menace of the instruments, and it all comes together like a drunk out of cold turkey rehab the first time he re-enters a liquor store. As I mentioned earlier, the riffs fly at you like an out of control pitching machine in some hellish batting cage, but not all of them penetrate the memory equally (I don't remember much of "Black Prophecies", for example). However, they are performed with such a taut intensity, ever on the verge of explosion, that they still sound like an impressive array beyond decades of shelf life, and even for 1986, there was a lot of bang for the buck here when compared to most thrash or speed metal efforts.

Darkness Descends might not be a personal favorite, but it certainly deserves its place among the legendary thrash elite for the simple fact of its existence as a dark, looming sentinel of extremity, a standard against which many brutal thrash or death/thrash records will always be compared. I might be in the minority in claiming to prefer the following albums Leave Scars and Time Does Not Heal, with their wall of text lyrical excavations and increased riffing complexity (which yielded mildly more memorable results), but this sophomore has always remained an enticing, reliable option for a refresher in the pure propulsion this genre once promised, a nuclear celebration of murder and mayhem that very few peers could stand alongside without having their knees broken and skins flayed off.