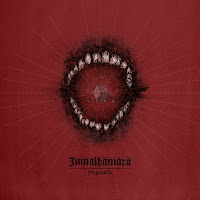 Last year I was truly smitten with the unique, psychedelic frontiers of a young Finnish act called Oranssi Pazuzu, and their debut wound up my top individual pick of 2009. A beautiful experience through all its vacuous details and grim regressions, it proved to me that there were boundaries yet to cross, and new realms to explore in what many would consider a tired, dated sound. Jumalhämärä once again remind us of this, though with a loose, disaffected, and different approach to the material that at times feels as if two separate but congruent bands are performing in disjointed unison. In fact, they go one further by defying the conventions of the metal structure in general, by randomly performing instruments through each of the band's songs, kind of like some hippie drum circle if they were magically whisked away to the Finnish landscape.

Resignaatio, the band's first proper full-length since their foundation 14 years ago, is a head scratcher of a debut, existing on a number of planes of existence and experience that must first be accepted in order to achieve true immersion. As I mentioned, this is like listening to two bands simultaneously. To your right, you've got a thundering Finnish black metal band, a mite more accessible than something like Horna, but barking up that same tree of grandiose raw fortitude, kissing the swamps and backwoods of the band's homeland with tongues of mist and fire. To your left, a band sporadically issues ringing, organic ambiance over the procession, through strings and added layers of vocal atmosphere that challenge depth perception. The result is something quite wonderful and unique, but also casts a loose net, which might not catch every fish swimming in its bleak, captivating sea.

A great example happens early with "Ecstasy in Blood - A Ballad", a 10+ minute excursion into the chaos of the writers' minds, raging through a number of forceful black metal rhythms with expert percussion, while multiple vocals, some harsh, some soaring wrangle off into the sodden and desperate night. After five minutes, the song transforms into this glorious segue of elevating emotion, and after this larval stage it becomes even sparser in the closing moments, eventually returning to the blast beat as higher vocals erupt and a clarity begins to emerge from the madness beneath. "Storm is Coming" is distinctly different, with plucky, dark clean guitars conjuring a dark background to the manly, low vocals, a frightening aural-caust of jilted withering soon forcing its way into the funeral. Shorter, "Haul" seems like pure emotional volcanism, the strange and discordant guitars bleeding into their own ambiance while the drums get busy.

"596" creates a march into feedback, with further gloom-laden clean guitars and slowly creeping bass, spending its full 6 minutes on this journey sans vocal interference, while "Resignaatio" itself careens along a staggering path of menace, multiple black metal melodies woven into a somber lattice of depression across its surface howling. The album closes with another of its longer pieces, "Of Enlightenment and Righteousness Pt. II", another loosely knit matrix of slaughter and compassion, huge resonant tones writhing through its sonic-sphere like placing your head on a highway during a cosmic event, feeling the Earth tremble in terror as its destiny shifts upon its axis, the cries of confusion of seven billion souls fading into the inevitable wake of leviathans. A total surge of mind-fucking, random brilliance.

The average listener of well-structured black metal music might have a difficulty in picking up what this band is putting down, but I assure you this is a ride well worth taking. It's as if Neurosis got even more tribal than expected and improvised a set after taking a time machine to the end of the Earth, each chunk of crust peeling off into the cosmos in an act of ultimate decay, Khanate and Circle of Ouroboros showing up to jam on the encore. Individual components are not 100% distinct or unique, but as the entirety is pieced, no, shoveled into place, I feel like there's not much quite like it. It isn't perfect, and at times in the longer tracks the cerebral, turbulent fusion can grow rather frustrating, but accessibility is not what the band set out for, simply rapture to the few that will be able to adhere to the band's indulgent, quirky system of controlled chaos.