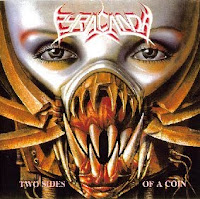 A face that only a mother could love. A beautiful, feminine, plastic visage staring dead eyed, its monstrous jaw harnessed by further fangs of rusted steel. You've got to love those Golden Age thrash bands and their imaginations, whether their album covers run away from the actual contents or not, especially when the musicians can actually back up their iconic artwork with savage, lethal hymns of unapologetic speed and undeniable potential. Pyracanda's cover girl (err, thing) here may or may not be the fiancee of Rage's more famous 'Soundchaser' mascot, but Pyracanda themselves were yet another in a large pool of German talent, one of the few bands on the No Remorse Records roster alongside Wardance, Grinder and the now famous Blind Guardian.

You might be able to guess that Pyracanda played a brand of German thrash metal, but they're not quite as raunchy, aggressive or biting as the Big Three (Destruction, Kreator, Sodom). Better comparisons would be early 90s Tankard, Accuser, Living Death, or Vendetta, though the material manifested here would also be of interest to fans of Rage, Risk, and possibly the great Scanner's debut, seeing that the band incorporates just enough melody to straddle the power/speed metal sect. The charging, thick rhythm guitars used often on the album also remind me of Artillery, or perhaps Metallica circa Master of Puppets, though they are nowhere near that quality and you won't hear as many dynamic shifts. Two Sides of a Coin was a worthy debut, with a slick and clean production courtesy of Armin Sabol (who also worked on a few of Rage's great albums like Reflections of a Shadow), rendering it rather timeless in the headphones even if the songs themselves do not rifle through the memory.

"Top Gun" is a rather interesting piece to start the album, with some bass pumping across the steady escalating of the guitar mutes and then one of the most straightforward thrash anthems reminiscent of simpler Metallica or Megadeth, though the thundering power metal bridge and vocals of Hansi Nefen place it firmly in the Germanic camp. Nefen sounds a little like Daxx of Vendetta with some Mike Howe (Heretic, Metal Church) thrown in, with a little uncouth and unnerving decay, powerfully sinister when the role demands it. Most of the songs hit a full on, charging gallop in which muted storms part ways for soaring, simple chords as the band splices in their chorus segments, but they'll usually incorporate some sort of interesting bridge centered on the solo, like the clinical chugging that bisects "Democratic Terror", the chugging backdrop to the lead in "Delirium Tremens", or the melodic bridge supporting "Don't Get Infected".

However, the band breaks pace enough that I'd consider this a well rounded effort. "Dreamworld (Good Bye, Mary Ann)" features a somber acoustic intro similar to some of those used on the Artillery masterpiece By Inheritance, and then some simpler, old school, uplifting hard rock rhythm guitars before the verse. "Welcome to Crab-Louse City" would be the most ambitious epic on the album at 7 minutes, also with a clean prefix and a melodic bridge that create this ambiguous irony with the very silly lyrics. Yes, this is perhaps the greatest thrash/speed metal song ever written about a man's revenge against the head lice that once infested him...and it's not the only one here! "Challenge Cup" also deals with the vermin! Unbelievable! Other tracks that are also unintentionally funny include "Don't Get Infected" with its (obviously) AIDs-related lyrics, the drunken seduction/rejection cycle of "Loser", and "Rigor Mortis", which is apparently about being a thrasher and then...being dead?!

You used to slam and thrash around but now you're lying underground
your blood runs cold, your flesh decays you must have witnessed better days

Goofy, English as a second language lyrics aside, though, Two Sides of a Coin is quite competent and consistent. The riffs throughout the album are rarely the type to invoke salivation or the instant desire to re-listen, but they're integrated well enough with the vocals and leads to provide 42 minutes of nostalgia, that is, if you close your eyes and think of German underground metal from the days when it still felt somewhat new. It's not really a 'grower', but it hasn't lost much steam thanks to the powerful, resonant mix and the cloying fact that too few of these bands managed to break out into the next level of success.