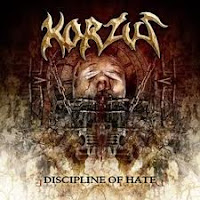 Though they're arguably one of the original Brazilian thrash acts, few would know it, because Korzus have ever eluded any real measure of popularity outside of their home territory. Still, the band managed to hang on all these years, producing full-length efforts at 4-6 year intervals since their 1987 studio debut Sonho Maníaco, and with a stark difference than most of their pre-21st century peers: Korzus do not hail from the same black/death/thrash hybridized roots as a Sepultura, Vulcano, Chakal, or Sarcófago. They're pretty much straight up thrash metal, with a slight parallel to the Bay Area sounds of Testament, Forbidden, and so forth.

I've never been impressed with much of their earlier work like Mass Illusion, and I feel it's safe to say that Discipline of Hate is the most polished statement of aggression the band has yet issued, with a slick and crisp mix that is nothing short of professional. Several long time members remain in the band: bassist Dick Siebert and vocalist Marcello Pompeu, the latter using a blunt but scorching tone that recalls the tough but modern California hammering of Machine Head, Defiance/Skinlab, Slayer and Testament among others. In execution, this works wonders against the taut and clear riffing component, which might not seem all that original, but creates a competent balance of violence and power that feels like a tasteful mix of Forbidden, Artillery and perhaps Japan's heavily riffy Ritual Carnage. At no point do Korzus indulge in any retro stupidity, this is business as usual and moving forward, with no slovenly tin drunkard 'thrash' acknowledgments in the lyrical topics.

Granted, the titles and a few of the sequences feel a bit generic. How many songs can be named "Revolution", "My Enemy", "Truth", and "Slavery" before the actual music becomes dulled by the tangible lack of ambition? Fortunately, the saturation point has not yet been reached here on Discipline of Hate, because some of those named rank among the album's most exciting. "Truth" opens with a bouncy, Excel-like riff before moving into a descending Slayer style and then Pompeu's vocals drip acid above a rocking riff not outside the sphere of Exhorder, Pantera and mid career Corrosion of Conformity. "Slavery" spouts incredible force, with intricate but blunted riffing that veers in and out of death/thrash as it breaks your neck by hurling bricks at the back of your head. "Revolution" and "Under His Command" are meaty outbreaks that easily terminate the latest works of Slayer or, say, Germany's similar sounding Dew-Scented. "You Reap What You Sow" is even better, with some intricate guitar melodies fresh throughout the track, nicely countering its more brutal hooks.

Not all of the writing is perfect here, but there are no real stinkers or duds. There are a few dull groove rhythms, but few last for very long, always interjected by some energetic burst or cutting lead. Discipline of Hate is the crown of the bands' quarter century career, and that means a lot from a band that many have either not heard of, or given up on after some limited exposure to their formative works of the 80s, or their cheesy attempt to branch out to nu metal hardcore groove on the abysmal K.Z.S. (1995). Discipline of Hate is where Korzus belongs, and with luck it will win them some attention from an international thrash scene desperately starved for more serious acts than the spastic retro-teens it is constantly bombarded with.