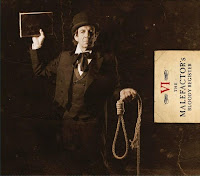 It would be difficult not to draw comparisons to the fellow Norse band (and super-group) Arcturus, in particular their sophomore La Masquerade Infernale, when listening through this new Vulture Industries record. Both generate that same vaudevillian, circus like antiquity through their compositions, and Bjørnar Erevik Nilsen has an upper register howling not unlike ICS Vortex or Trickster G. But to write them off as a mere ripoff would be selling this band short, because The Malefactor's Bloody Register, while not perfect, is for the most part a blast to listen through, taking into consideration the wealth of riffs used to complement Nilsen's wild vocal performance.

No, Vulture Industries might not feature members from the Norse elite, but they do draw their roster from fellow acts Sulphur and Black Hole Generator, each mildly innovative in their own right, and the care placed into the songwriting here is rather obvious, even though the album teeters off in its closing chapters. "Crooks & Sinners" creates a brief, bizarre saloon intro that heralds the oncoming rush of the "Race for the Gallows", which is certainly one of the most memorable tunes on the album, engraving it's archaic execution concept through frivolous, entertaining vocal patterns that sound like strangled Gothic hip-hop over a surge of desperate, cautionary guitar rhythms that intensify with an almost Faith No More bluntness to the chords that flow beside the jamming drums, intricate melodies and keys.

"The Hangman's Hatch" is another scorcher, with uber grooving basslines and wonderfully adventurous guitars that make you feel as if you're in some Norse noir lunatic asylum, briefly stopping over in the jazz line during its midway point. "The Bolted Door" continues the mix of jamming, circular rhythms and distorted, rambling bass as it shackles itself into a system of groove metal guitars, black rasps bloodying Nilsen's higher Vortex cries. "This Cursed Flesh" gradually climbs the rope, casting a strange, cerebral gloom upon the listener, while "I Hung My Heart on Harrow Square" features Nilsen's shaky cleaner tones over a melodic, progressive format. The trip hop-cum-progressive-black-doom of "Crowning the Cycle" was interesting, but for some reason I felt my attention span dropping off, and the low piano tones and bounce of the finale "Of Branded Blood" sound like the last call at some Gothic saloon, somewhat dredging up my attention span from the tar pits.

Frankly, there are not a lot of bands who can conjure up comparisons to the Norse circus acts like Arcturus, and Vulture Industries deserve a little credit not for the derivation, but for dialing back that style to incorporate more metallic elements on the whole. The Malefactor's Bloody Register is well enough written to captivate through a number of listens, especially the coiling guitars, pumping bass and Nilsen's emotional vocal outbursts which are often uncannily catchy, and I'd have to give it a slight edge over their 2007 debut The Dystopia Journals. The ticket to ride this proggy black merry-go-round is probably worth the admission fee if you're in the mood for something a little adventurous, but despite the very valiant attempt, it ultimately does not resonate forever.