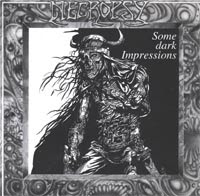 Necropsy is one of those suitable, menacing enough monikers that dozens of death metal acts decided to claim, both old and new, a pair of whom hail from Germany. One of these was formed in the early 21st century, just last year releasing their solid if forgettable debut Deathprayer (which I also reviewed). But long before that, another band of dour Deutschlanders decided wielded the title, and they enjoyed a brief career that started with a 1990 demo and ended in their signing to the then-infant Century Media, which produced this rare 7" known as Some Dark Impressions, a mere three tracks, but with no crossover to the demo material.

What we have on offer here is nothing particularly impressive, a volley of pure death the likes of which remind me of some of those classic offerings from Roadrunner Records, like Obituary's Slowly We Rot or Sepultura's Beneath the Remains and Arise. In truth, I'm not a fan of Arise, but I mention it here because I feel that Necropsy had the same approach to writing thickly produced riffs that somehow did not manage to catch my ears. Otherwise, you could also compare the band's oppressive regime to fellow German acts like Morgoth and Atrocity (first two albums from each). Vocalist Marc had a style similar to Chuck Schuldiner, Max Cavalera and Mark Grewe, and the guitars just have that descending, bruising tone like Obituary, with that distinct thrashing influence.

None of these songs are necessarily good, but "Drown in Mortal Remains" is possibly the crown of the trio, with a slow, pummeling neanderthal thrash intro that in addition to summoning forth some oblique mix of Obituary and S.O.D., lurches straight into the blasting, Sepultura styled verse rhythms. The lead is actually quite nice, the crisp clarity cutting straight through the mud faced rhythm section, but sadly it's the highlight, because none of the other riffs really stick to you. "Choir of Depression" has some monstrous low-pitched creature vocals as a part of the introduction, and the riffs here pick up in technicality from "Drown...", but neither are they very memorable. "Incarnation" does manage another descending, carnal groove, and then the riffs are again sufficiently busy, with a decent bridge, but it just lacks in charisma.

For whatever reason, Necropsy disappeared into the dust of the waking fury that was European death metal, neither as ripping as their Swedish contemporaries or as qualified to write songs as the Florida heroes, or even their own neighbors like Atrocity. We are left with but 14 minutes of official output, and nothing here is impressive enough to really warrant a repeated listening. At the same time, there is nothing immensely dull or negative about the release. Kinda cool cover art, morbid but simple logo, and average death metal that simply held no ground against your Morbid Angels, Entombed, Suffocation, Grave, and so forth.