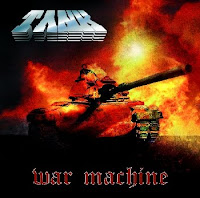 The prospect of a Tank without founding bassist/vocalist Algy Ward is a frightening one. I simply did not want to believe it could ever happen. Sure, he's perhaps not as notorious or famous a frontman as Lemmy Kilminster or Biff Byford, but nonetheless, his vocals were the heart of what made this band tick through so many of their good albums. Nevertheless, War Machine has arrived, and with it a new era for the band. The split may or may not have been amicable, Ward busy writing an autobiography that covers his time in not only Tank, but punk legends The Damned, and so forth. I can only imagine how hard a decision it must have been to even continue the band in such a condition, but they have chosen to do so, and the least I could do is not be a fuckwit and take this for what it is.

Of course, this leaves only drummer Mark Brabbs as the original member, returning a few years ago after Graeme Callan unfortunately passed away. Brabbs himself has not been within the fold since the first three albums ('82-83'), and he reunites with Mick Tucker and Cliff Evans, who both joined the band in the 80s as well as the 1997 reunion (which this record is the culmination of). To fill out the new roster, Tank has hired on bassist Chris Dale of once potent rockers Atom Seed (also the Skunkworks era solo band of Bruce Dickinson), and none other than Doogie bloody White of Rainbow, Yngwie J. Malmsteen, and Pink Cream 69 fame. Yes, folks, the boots of Algy Ward are massive, and nigh impossible to fill. So the band might as well get a god damned veteran howler in his spot, and as White proves here, he's as good as any, with a style pretty close to Biff Byford of Saxon (it's almost eerie at times).

In fact, I'd write off the entire album as a Saxon-a-like, but for the simple fact that Tank themselves have already been crafting their career in this mold for 30 years themselves, and the similarities are more of a cross-section than a derivation. If you're expecting the Motörhead fury of Filth Hounds of Hades, you will probably be once again disappointed (as you've been no doubt been with every Tank record since 1982). This is far more akin to the aired out, more mellow nature of a This Means War or Honour & Blood, and I'm not complaining. The band's grasp for huge, classic riffs and earned melodies still rides to the forefront, made clear as early in the track list as opener "Judgement Day" or the cruise mode of "Phoenix Rising" and "The Last Laugh". There are some softer moments here like the ballad "After All", which is somewhat forgettable but not a distraction. My personal choices include the closer "My Insanity" with a superb mix of melodic radio metal and thundering riffs, and the title track, 7 minutes of slow and sure metal that recalls their 1983-87 period in vivid gray.

War Machine seems a fairly refined addition to the band's legacy, best targeted towards the mid to late 80s Tank fanbase, or those NWOBHM diehards that don't mind their metal huge, slow and bearing the classic apparel of a Saxon, Blitzkrieg, Def Leppard or Praying Mantis. The album is rarely very fast, so those with attention spans for only the blitzing speed of a Venom, or the pounding, relentless grit of Motörhead might find this record too far gone to an age of arena resonance, where the power of simple chords and soaring vocals ruled the roost. Even without Ward aboard, the band still honor themselves and stay true to the metal they forged for most of their career, instantly dissolving that 8-year gulf since the previous album Still at War; and though they were never exactly on the A-list to begin with, there is something to be said for this purity in the face of maturity and oblivion.