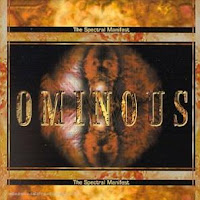 Ominous are one of many bands who were probably around for too long before releasing their debut album. Forming in 1991, they established themselves as an internet presence back in the early years of the medium, and cranked out some demo material that was at least promising, with a style that felt like the modern 90s crunch of later Carcass mixed with some progressive, thrash, groove and even a seasoning of brutal purity. Of course, by 2000, when The Spectral Manifest actually debuted, they were arriving on the cusp of many paradigm shifts in the scene, and this long awaited (or rather, expected) effort was lost in the shuffle of the newfound explosion in ideas and execution that was found throughout their native Sweden and beyond.

Still, this is a fairly professional sounding album, with a great, punchy studio tone carried out in thick guitars, and it exists on a unique crossroads between Carcass, Meshuggah, and perhaps a little of the Canadian band Obliveon. The vocals are nearly as blunt and bludgeoning as the guitars, stirring up a balanced, percussive cacophony with the hammering drum work and perhaps far too prevalent chugging momentum. This is perhaps the biggest failing of the album to leave a long term impression, though, because the band's sense for dynamics is too often sold short by the rather basic power muting and low end crunch, as if to create a modern aesthetic ripe for the mosh pit, tasteful in bites but overall there must be some reason it fades so soon from the memory.

"Piece of Humanity" kicks off like a more groovy, 90s Sepultura-strewn answer to something off Carcass' Heartwork, with swerving, mechanical hooks that occasionally summon up a rather wan comparison to fellow Swedes Meshuggah. Both the grunts and snarls are used, and near the song's climax they burst into some shuffling grooves and a dominant bass line. "Cry for Dawn" shifts territories with its windy, acoustic intro, and then it transforms into a straight up melodic death metal track, very Swedish like a slower At the Gates or Hypocrisy from this period, splintering off into some big thrash grooves and a half-decent, melancholic melody. "Soon to Be Broken" ushers in a progressive death metal sensibility, and "Forever Remains True" once again throws a wrench in the works with some femme clean vocals. Probably the best songs on the album arrive in the form of the brief and destructive "Keep in Graceful Memory, and the winding, melodic building blocks of "Drained by a Soul", but these too ultimately fail to remain upon the brain once you've moved on.

The Spectral Manifest is a full service showcase of what Ominous represents, thoughtful but sadly lackluster songwriting that never exhibits any hesitation to screw around with formulas or present something unexpected. Based on the production alone, which is quite massive, I would have expected the album to cause more of a ripple through the underground, but it seems to have been short lived, which is somewhat of a bummer as the band had put nearly a decade of hard work into its formation. Alas, there is little to recommend unless you're a fan of melodic death metal with a large amount of simplistic chugging interspersed with slightly more frenetic outbursts.