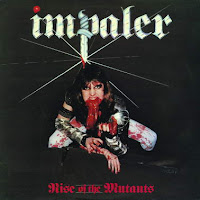 With a career spanning 27 years, it's a wonder that Minnesotans Impaler have not built a bigger name for themselves. They're brightest and boldest opportunity was probably their initial pair of releases through the esteemed Combat records in the mid 80s, when the band's blend of shock rock and filthy street/speed metal was somewhat novel, yet they seem as if they've been all but forgotten, relegated to the dark, misty alleys and mad scientist laboratories of nostalgia. I can attest that this is a band better represented in the live setting than the studio, as their performances are full of corny slasher horror charm that seems the natural, extreme metal extension of Alice Cooper or KISS, but the music rarely delivers much beyond a mere accompaniment to the maddened antics.

Rise of the Mutants was the band's first 'official' release after several demos, through Combat, and a fairly accurate representation of such musical shortcomings. There is nothing inherently wrong or negative about the band's style: think dirty, blazing raw guitars performing average speed/punk metal riffs ala Exciter with the occasional lapse into NWOBHM-flavored leads. The lyrics delve into S&M ("Crack That Whip") and bloody stage horror ("Shock Rock"), and serial killers with the band's namesake "Impaler". Two of the four tracks on the EP are notably superior to the others: "Shock Rock" and "Heaven's Force", with bolder chords battering along to Bill Lindsey's snarling, spitting vocals. The former has some decent, breakneck speed metal riffing though it's under 2 minutes in length, and "Heaven's Force" reams along with a whacked out guitar intro and a sufficient boogie to the verse beat, Lindsey getting fairly nasal and vicious like some sort of cartoon weasel or rat. "Crack That Whip" and "Impaler" are both dirty and competent, but the choruses offer little escalation and the riffs are quickly forgotten.

Compared to other Combat acts of their day like Megadeth or Possessed, Impaler were simply not strong enough in the compositional skill to stand out in the crowd. The bloodied album cover begs some attention from a demographic titillated by the increasing extremity of the 80s, but even as far as shock metal, you had better alternatives like Lizzy Borden who musically run leaps and bounds around this material. Granted, the intention here is not to become some Mozart of metal, but to craft barbaric hymnals to accompany the band's stage presence, and I think their material is generally more fun when you can see them rampaging around with blood, guts and straight jackets hanging out. The nearly 10 minutes of Rise of the Mutants serve as an effective teaser to the full-length debut If We Had Brains...We'd Be Dangerous, which is in my opinion the band's best album (with better songs than found here), but in the long term there is no reason to revisit this with so many better alternatives available, unless you just want to shut off your own brain and listen to some superfluous punk-driven speed metal.