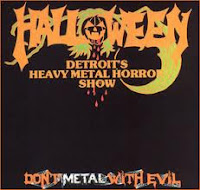 Decades later, I've still not made up my mind as to whether Don't Metal With Evil is one of the best, or worst album titles I've ever come across, but there can be no debate over the contents: some of the most entertaining Midwestern speed metal I've ever heard. The band name Halloween must have been in hot contention back in the 80s, after all it's about the coolest holiday on the calendar and just an utterance will conjure nostalgia for demons, spirits, witches, black cats, pumpkins, candy and horror in even the most stiffened, jaded mother fucker out there. This was a fairly theatrical act, fully embracing the subject matter into which they delved, and to this extent they might be compared to a King Diamond or Lizzy Borden, two of the 'shock metal' greats.

The music is also comparable, because it's melodic and well written, accessible but raw in that delicious 80s aesthetic. I won't claim that Brian Thomas has the vocal chops of those masters, in fact his voice is the weakest link on this debut, but he does attempt some shrill, frightening notes on the album, and even at his worst he fit the splattering speed momentum of the band very well. The guitars are the dominant 'evil' here, Rick Craig spring loaded with riff after riff of thrusting, tasteful dirt rooted in Venom and Saxon, but a lot busier, with a propensity to shred off with numerous fills in pieces like "Trick or Treat" and "Don't Metal With Evil". The rhythm section was also well versed, Bill Whyte's drums crashing all over the mix and George Neil's bass strutting along as the perfect foundation for Craig's eccentricities.

Don't Metal With Evil also has a great mix of material, between the vicious roadsters like "Busted", "Trick or Treat "and "Fight the Beast" to the mid-paced heavy metal hammering of "Scared to Death", "Haunted", and "What a Nice Place", reminiscent of a more complex Twisted Sister. There's only one arguable power ballad here, "Justice For All", and a potent, plodding piece called "Tales from the Crypt" that definitely channels a Maiden-esque appeal akin to what you'd find in late 80s Running Wild. The band doesn't take itself all that seriously, so you'll hear some cackling fun to inaugurate "The Wicked Witch", or some male cackling in "Trick or Treat". Lyrically there is some confusion, as the band veers through horror themes, typical 80s glam seduction ("She's a Teazer"), and even a few more poignant and serious ("Justice for All") themes, but such a blend is not uncommon for this period, and for 1984, Halloween's lyrics were actually decent.

You're goddamn right it is, and Detroit's Heavy Metal Horror Show had a breakout record here which sadly never quite reaped the attention it could have. To it's credit, though, Don't Metal With Evil is one of those inspiring efforts that just hasn't seemed to age through the intervening decades, easily trumping everything the band have released since (though their output is sparse, they've continue to roll out new material every few years). Halloween were performing at an interesting nexus between the more radio prone glitz metal of their day ala Twisted Sister, Malice and Lizzy Borden, and the USPM of Liege Lord and Omen, and thus there's at least something here for anyone that craves poisonous, obscure 80s candy corn.