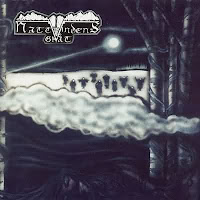 The year after Nattvindens Gråt released their worthy if oddly vocalized debut, A Bard's Tale, two of the members (bassist Sami Vänskä and keyboard player Tuomas Holopainen) would go on to form Nightwish, which in a few words would become a huge commercial success throughout Europe and beyond. However, this would not spell the end for the doom band, as the troops were rallied for one more album through Solititium, Chaos Without Theory, which was sadly almost as neglected as its predecessor. It's not much of a surprise, really, since by this point the market of European metal was really picking up in various categories, with the bigger black, doom and death metal bands making some waves, and many like this project were simply not serious enough to escape falling by the wayside. In fact, very few acts on the Solistitium imprint made much of an impact aside from Behemoth, who later changed their style and became an institution.

At any rate, Chaos Without Theory is a tighter affair than A Bard's Tale, and there is certainly an improvement in Tapio Wilska's presence. Here he ups his game considerably, shifting from the Yearning like groans of the debut to a Finnish likeness of Moonspell's Fernano Ribeiro: doomy, deeper and fully gothed out. Sure enough, it works well, but what of the music itself? Well, this is largely the style of the previous album, thick and simple doom riffs not afraid to kick into a mid pace, with a ton of keyboards layered over the top, but it has also become slightly more technical and fluent in tracks like the thrashing "Dance from Beyond" or the flowing "Liquid Silent Dreams". There are also some driving Gothic/doom metal numbers like "Sadoeroticart" and "Sleep Eternal" which recall Moonspell, Dreadful Shadows, Tiamat and so forth. While these are tolerable, it is the thunderous Arabesque mystique of opener "Sethian Seal" and the pummeling chords of "Chaos Without Theory" that truly stood out to me.

There are also a few slower pieces, namely "In Gothic Archways" and "Sorrow's Shroud" which develop a stronger atmosphere, but almost as a trade off, the vocals in the latter seem to skirt back towards the silliness of the debut, at least temporarily. In general, though, the album's production levels and the majority of Wilska's performance are superior to A Bard's Tale, while the songs just...aren't. The gloomy mood and atmosphere of the debut are somewhat present in the songwriting, but the more professional power of the mix and the general energy the band implements detract ever so slightly from what made that album 'special' in its own, lame but lovable way. Chaos Without Theory is no slouch of a sophomore, but aside from the few songs I enjoy, it all seems to blend together and settle itself into mediocrity, and I never feel compelled to sit through the entire thing like I do the debut (on a rare, rainy day).

This was not necessarily the 'end' for the project, as guitarist Teemu Kautonen would resurrect it as plain Nattvind for an album in 2002, but that had more of a straight Gothic metal feel, and should probably not be considered one and the same with the original incarnation. That album, Subuniverses, is also even more painfully more difficult to find than either Gråt effort, and it wouldn't find any success beyond what the band had already failed to accomplish here. Sad but true: if you were not purchasing a lot of imports or targeting Solistitium releases in particular, it is likely you've never heard of this band. They're not necessarily doomy enough for the doom laden, or Gothic enough for the goths, but they do find an epic balance of the two that mirrors Swedish acts like Lake of Tears or Tiamat in their heyday. I've mentioned the similarities to Yearning a number of times already, but that band's debut With Tragedies Adorn, which came out the very seem year, destroys this record.