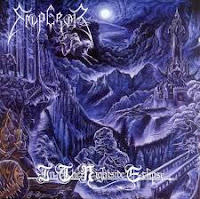 A lot has been said about Emperor through the years, and not all of it flattering (Norwegian black metal + popularity = walking target), but indisputably they were and will always remain one of the most important of the 'second wave' bands within the genre. They also bear a distinction as one of the most 'dignified' in the field, having conquered several shores with their mighty live performances and then choosing to avoid the pitfalls of stagnation when they felt they no longer had much to offer. This decision came after four full length efforts, each of which marked a notable stage of evolution, Ihsahn and Samoth never content to rest on their laurels by rehashing or sidetracking their writing process.

My personal interest in their work waxed and waned through these changing tides, being of the tiny minority that found Anthems to the Welkin at Dusk and Equilibrium IX to be flawed outings beyond a few particular tracks, and later developing a fondness for their divisive grand finale, Prometheus - The Discipline of Fire & Demise. However, I have long treasured their debut In the Nightside Eclipse, not only as the masterpiece of Emperor, but one of the absolute pinnacles of the genre, the sort of rare accomplishment that is reached only a few times in each generation. In fact, I'd go so far to claim that In the Nightside Eclipse is greatest 'symphonic' black metal album ever written, even if that symphony consists of only Ihsahn with a keyboard and vivid imagination.

So much about this record is enormous. The cover is by far one of 'Necrolord' Kristian Wåhlin's most beloved images, a beautiful but menacing moonscape of towers and bridges, vortex clouds, woodland expanses, haunting spirits and battle starved humanoids, almost like the final battle of The Lord of the Rings being played out across a 2D nightmare diorama set against the band's impeccable logo and a wisely chosen, archaic title font: every depraved D&D maniac's dream come true. The production itself is airy and horrific, falling somewhere below a polished state without the intentional marring of fidelity committed by so many of the band's countrymen and peers. Complaints about the mix might be seen as partially valid, for example the rhythm guitars feel mildly faint against the swelling synthesizers and rasp, impish drawl of Ihsahn, but I can honestly say that I would have it no other way, and the very 'flaws' themselves of the production only add to its memorable nature.

It also invoked a stark balance of terror and majesty that thousands of others have attempted but so often failed to emulate. Sure, In the Nightside Eclipse is rather dated in the grand scheme of its genre, but there is this timeless, authentic quality found somewhere in the margins of highly effective composition and thematic intent that has never ceased to thrill, and when I think back on many late autumn or winter night drives I took to and from my university, along the sparsely populated back roads of central and western Massachusetts, listening to this as my drug of choice, I still get the occasional shiver down my spine. Perhaps I'm just a spineless pantywaist for admitting it, but this album used to scare the fuck out of me, as I attempted to conjecture about the Norse madmen responsible for its existence and what a pale wraith of uncultured American flab I must have been by comparison...

There are also songs. Eight beautiful, flawless songs that foster the cold moonlight and stir the despotic winds of egocentric fantasy. Twilight wanderings from the bleak core of the human psyche, the devious spirit, to the expanse of endless, distant fires that leer at us from beyond the known sphere upon which our flesh depends, the cosmic eaves of horror and uncertainty that bear down upon the soul. The cleverly (?) titled "I Am the Black Wizards" is probably the best known of these, a clarion call to battle against a thousand years and suns, a tribute to all black and blazing phantoms of antiquity. Samoth's guitars are scathing delights that resonate like frozen fire across the punishing prowess of Faust, the tongue of Ihsahn spewing wretched poetry, the backbone of Tchort rumbling beneath like a ghastly march towards oblivion. The gorgeous sequence at 1:50 is strung out across the starlight like a chorus of waning angels, twisting into a powerful momentum worthy of even Bathory's epic Blood, Fire, Death, and at 4:00 you can prepare yourself for one of the most captivating, eerie melodies in all human history.

My wizards are many, but their essence is mine
Forever there are in the hills in their stone homes of grief
Because I am the spirit of their existence
I am them.

"Cosmic Keys to My Creations and Times" travels from an icy momentum to a schizoid funnel of discordant, driving chaos, then back again as the snarling erupts, while Faust gets so much exercise that it's a wonder he didn't suffer one or many heart attacks during the recording. "Inno a Satana" fills out like a contaminated muse, licking the wind with soaring, clean vocals and more of the brazen, synthesized choirs that work as well here as on nearly any other recording on Earth, while "The Burning Shadows of Silence" thrives on stun, whipping breezes of dementia that adorn the scintillating ghostlike savagery of the keys. "The Majesty of the Nightsky" rolls over you, transforming you into some fallen, final chess piece before the sailing Nordic melodies around :40 sweep your ashes and sorrows into the dust of ages, and the 9+ minute epic "Into the Infinity of Thoughts" cycles through its grim, ambient intro to some of the most threatening but beautiful black metal to ever lock up the joints of men. Really, every fucking song on this album is unmitigated awesome, and I am nearly as awestruck today as I was when I first heard it.

You could say that Emperor were the first of their kind to take the 'high road' in black metal, to transform this vile and infectious new brand of extremity into something so much more grandiose than it might have deserved, while Darkthrone was well underway mastering the 'low road' of delicious primacy that was born of Hellhammer, Venom and Bathory. In the Nightside Eclipse is so desperate and inspired that even Emperor could not and never will surpass it, and clearly a standard was being set well out of the reach of most impersonators, even with over a decade of interim in which to refine it. Ambitious as they are, and try as they did, the later efforts do not possess this same level of consistency, exchanging atmosphere for the technicality inherent in progression, and the precision of bigger budget, studio accessibility. I wouldn't trade this album for a 100 Anthems to the Welkin at Dusk, and to my ears, it remains one of the greatest of its kind, alongside A Blaze in the Northern Sky, Hvis Lyset Tar Oss, Transilvanian Hunger, Black Shining Leather and Blood Fire Death.

5000 reviews later and you still come up with unique things to say about old records. Personally, I adore every second of Prometheus, but this is definitely a classic; one a need to give a fresh listen to.