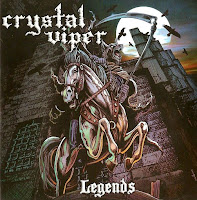 It's rare enough to hear a female fronted power metal act that doesn't lag into fairy/Gothic metal posturing worthy of a Stephanie Meyer convention, much less one that is actually flat out good, so Crystal Viper continues their stint as a welcome anomaly in the genre. To boot, the band's Polish origins and Leather Wych's rather acidic pitch give it a distinct and tasteful European flair that conjures up nostalgia for German speed metal greats like Scanner, Mania, Reactor, and early Rage, a sound that is all too rarely represented against the more flowery sounds emanating from Scandinavia or the robust, driving anthems of your Gamma Rays, Rhapsodies of Fire or DragonForces, but there's plenty of enormous melody here to appeal to fans in any of these areas.

Legends is the third full-length, following up the promising, borderline potency of their 2009 effort Metal Nation, and it carves out an intro and 10 themes of galloping melodic fare that seem almost a bit reserved when compared to the earlier material, or at least polished. The guitars are knuckle dusters of surging power recalling Running Wild or Rage, while the leads bring out the fast flurries of anthem force pioneered through Helloween, and Gamma Ray. High above all but the solos, Leather Wych cuts a captivating, crystalline entity whose voice is barely chinked other than the accent, which only adds character. Sadly, the album does suffer from a slight case of predictability: as soon as a chorus begins, you're almost assured of where it's going.

This safety net could hardly be called a plague upon the writing, but it does lessen the impact of the vaulting "Blood of the Heroes" or "Night of the Sin", for example. Thankfully, though most of the tracks here charge along at the same relative, explosive pace, there is enough deviation to perk the listener's interest, especially when one has such a huge soft spot for the German style this resurrects. "A Man of Stone" functions as a worthwhile, finer sex version of something that might have appeared on Keeper of the Seven Keys I and II, while "Black Leviathan" conjures up some tasteful phantoms of Maiden and Running Wild. The piano laden ballad "Sydonia Bork" doesn't quite live up to its potential, but "Secret of the Black Water" rocks out fiercely, like a more venomous tinged alternative to classic Zed Yago/Velvet Viper.

Legends is likely to breed a lot of excitement among Euro power metal fans, and with good reason, because it's been far too long in a band like this coming around. I enjoyed the fantastic or supernatural subject matter of the songs, and the clean gloss of the mix. Unfortunately, the material here, while strong, is not exactly about to become parasitic within the listener's mind, because it's simply been done before, and better. The cover of Accept's "TV War" is tasteful and a few of the songs like "Black Leviathan" and "A Man of Stone" should be counted among the better of this style in recent memory, but it's only a marginally superior effort than Metal Nation.

Posted by autothrall at 4:18 PM