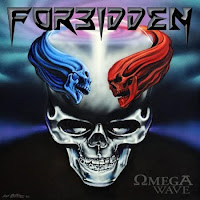 Forbidden were an exciting prospect for the Bay Area thrash scene of the late 80s, a skilled band that could incite vicious pits through a carefully coordinated vortex of riff-work, mild technicality and a charismatic vocalist, Russ Anderson, who was pretty unique among his peers, capable of both melodic overture and threatening venom. Their legacy was inaugurated with the memorable debut Forbidden Evil, an appearance on the fabled Ultimate Revenge 2 VHS and then refined to the more accessible but no less competent Twisted Into Form, which saw them cap out their success with MTV videos and good tours. Despite this initial burst of tangible potential, the band did not carry on into greater things. The 90s brought a pair of more modern efforts in Distortion and Green, but both were very disappointing when compared with the band's great legacy "Step By Step", "Rest in Piece", "Chalice of Blood", or "Forbidden Evil" itself, and it's not a stretch to envision how these diminishing returns lapsed Forbidden into a career coma.

One decade post-Green, Forbidden reformed in step with the re-emergence of thrash metal as a potent, sweeping sub-genre polluted with wannabes and old timers honoring themselves, and thus the fifth studio album was inevitable. I was not looking forward to this, as one of those initial fans let down by their 90s output, but I am very pleased to eat crow here, because Omega Wave is certainly the band's best material since 1990, even if a few of its modern flourishes do not spur on the expected level of impact. Russ Anderson, Craig Locicero and Matt Camacho have reunited here with the addition of two more California thrash veterans, guitarist Steve Smyth of Dragonlord, Testament, etc and skin basher Mark Hernandez who has served in Vio-lence, Heathen, Torque and Defiance among others. Together, the five lay waste to any subdued expectations of their ability to write memorable, progressive thrash, and this is probably the album that should have arrived in the early to mid-90s, cementing their momentum into one of California's finest in the genre. Alas, we've yet to master temporal displacement...

I'd actually liken the evolution of this band to that of Germany's Paradox. They too produced some great work earlier in their career, and then upon reforming were able to chip the rust off their joints and bones and come up with something even more complex and aggressive. Omega Wave is a storm of impressive guitar wizardry that never abandons its thrashing core, and thus "Forsaken at the Gates" and the amusingly titled "Adapt or Die" deliver thrill upon thrill of well written riffs to which Anderson's soaring sneers do naught but justice. Often times the band will incorporate a little of their 90s groove ("Overthrow") or slower, plodding tracks that focus more centrally on the vocal lines ("Swine"), but even these incorporate enough riffing fortitude that they become swiftly irresistible, like the unforgettable, eerie glinting of the melodies in the bridge of the latter. "Dragging My Casket" is even more interesting, a moving, melodic lattice with a highly accessible verse sequence, and "Inhuman Race" feels like what might have happened if Soundgarden or Alice in Chains had become a tech thrash outfit.

Once in a great while, there will be an overly aggressive vocal or a grooving ploy that distracts one from the overall experience, but considering that there are 12 tracks and over an hour of new music, these are mere minutia. Omega Wave is like an 'Odyssey' for Forbidden, an epic that the band must have conceived only through many hours of trial and error, taking the elements that were so charming 20 years ago and ramping them up to enthrall the younger generations of thrash novelty. Russ Anderson sounds as if he hasn't missed a step, capable of his prior range and more, acidic and wondrous, with effects used only to accent his native tones. The song dynamics are thriving with essential energy, bustling with dynamics, never boring, and this is by far one of the better technical thrash offerings of 2010, the screaming red and blue skulls colliding once more in triumph. Welcome home, my friends. Welcome home.