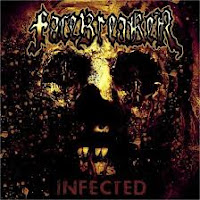 It must be the coolest thing in the world to be a part of a band called Facebreaker. I mean, just think about that...you're rolling up to a gig with a bunch of other tough guy bands, only none of them have that distinction. You sign in to the club or hall, proudly exclaiming that Facebreaker have arrived. You meet a girl in a bar, she seems into you, and when she bats her eyes at you wolfishly and then asks you what band you're in? Facebreaker. Congratulations, you have scored. You get a friend request on MySpace from a band called Facebreaker, and there's just no way you could refuse it? I mean, if you did, they might break your fucking face! Nobody wants their face broken. There is just something so direct and hard ass about that name that only fear and respect can be inspired. Well played, you goddamn Swedes.

Now that the cat's out of the bag, it's no surprise that Facebreaker are a Swedish death metal collaboration featuring members of other, established acts (kind of like Bloodbath, Jr.). Growler Robert Karlsson has featured in Edge of Sanity, Darkified, Scar Symmetry, Pan.Thy.Monium and the more recent Devian, and he's joined by a guitarist from several of his former demo-level bands: Janne Invarsson. Fleshing out the band are Jonas Magnusson and Mikael Wassholm of the short-lived Swedish death/black act Ashes, and guitarist Mika Lagrén. Infected is the third album from this entity, a polished and pure libation to the gods of Swedish old school death metal, with enough crunch, atmosphere and studio superiority that it begs some attention even despite its lack of inspiring riffs.

Facebreaker, however, are also slow and warlike enough that they can conjure comparisons to the crunchy war-death of a Bolt Thrower or Hail of Bullets, and this album is actually quite close in composition to the latter ("Cannibalistic", "Mankind Under Siege", "Into the Pit"). So there's a little more here a mere mirror to the inescapable past, though fans of the primal Swedish butchery of Dismember, Bloodbath, Centinex, Grave and Entombed are all going to sprout instant erections at the muscular pandering of the guitar tones, and barbaric simplicity of the writing ("Creeping Flesh", "Torn to Shreds", "Waiting for the Pain"), provided they don't mind the lack of novelty. Most of the songs feature some worthwhile shredding, even though the base riffs would probably lack something had they not been mired in such a huge and reliable production.

Personally, I found the material fun if ultimately forgettable, unlike the band's moniker. I don't recall being all that thrilled with their sophomore Dead, Rotten and Hungry, so I can attest that this is superior, and something can be said for the very modern atmosphere to which these Swedes have applied the tried and tested formula. Left Hand Path and Life is an Everflowing Stream this is not, you're looking at something more along the lines of The Fathomless Mastery or Resurrection Through Carnage, only 'tougher'. Infected hits like a ton of bricks, but you don't always want to stick around and see whatever got splattered beneath them.