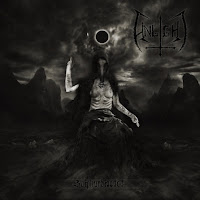 I really hate to use the term 'professional black metal', because it immediately instills some sort of corporate haze into the onlooker, and most grim, underground pundits would like anything BUT such a band's image in their mental playlist. However, I use the phrase here only to describe the production values of German Unlight's fifth full-length, which is so polished that Necro-fellators will likely flee from the scene, not realizing why the soap suds are pouring out from their ears. Yes, Sulphurblooded is clean as a whistle, but that does not necessarily undercut its ability to deliver aggressive material with a noticeable influence from thrash and the melodic death/black metal found in Swedish acts like Dissection, Dark Funeral, Lord Belial and the like.

These guys have been around for some time now, but took an upgrade when signing to Massacre Records and releasing last year's Death Consecrates with Blood, no doubt expanding their visibility amidst such an overcrowded scene. That album did very little to impress, but it wasn't bad, as the band showed a clear ability to compose riffs that flowed through one another in sequence. Harmless, really, but therein lies my problem with the bulk of Unlight's material: it's neither grim and caustic enough, or innovative enough to hold my attentions for long. The band are all tremendously tight at their execution, just listen to the arpeggios that erupt in "Dead All Things Will Be (Part I") or the blasting vortex of "Sound Force the Trumpets...That Shall Never Call". Blaspherion has a thick, solid vocal rasp that oozes power, but very little menace as its just too consistent for its own good, similar to a Shagrath in that he can compliment himself with growls to beef up the bottom end.

The riffs themselves are nothing to truly scoff at, each written with some degree of accessibility in mind, but certainly nothing wimpy. "Sic Transit Gloria Mundi" weaves a glittering melodic force in between chugging and driving elements, while "Become an Opponent" has a savage, choppy melodic death/thrash appeal to it that certainly titillates on the tongue for its duration. "Invictus" could easily appear on one of the more recent Dark Funeral albums and few would be able to tell the difference. "By the Seventh Spell" is working just as the band intended, a mix of black thrash akin to Witchery or Maze of Torment and with some of the most disgusting vocals on the album.

No two tracks anywhere sound precisely the same, but unfortunately none of them offer but a few minutes' interest. There is no deeper layer beneath, no subtle overture of madness and vice to compel the ardent black metal legionnaire back into its manifold. Simply put, in trying to sound as focused and evil as possible, the album just isn't all that diabolic. If you worship to a fault the studio prowess of the bigger Swedish bands in this territory, Unlight offers you more in that vein, a loud and crushing, competent bombardment of dynamic melodies and brutality. Sadly, it feels too pasteurized and permissible, too easy to swallow, like vegetable died Halloween blood instead of salty, rich hemoglobin.