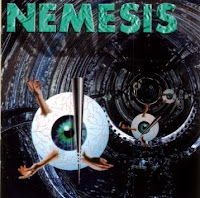 Though there are undoubtedly countless bands called Nemesis, the best of which would be the Swedish precursor to Candlemass, I was interested in tracking down this particular Nemesis due to the involvement of early Tankard members Axel Katzmann and Arnulf Tunn, the former of whom played guitar on my favorite albums from the German alcoholics (Zombie Attack, Chemical Invasion, and The Morning After). I wasn't really sure what to expect. The surreal cover image seems most fitting to some brand of technical thrash or progressive death metal, and yet the sounds of this unit's sole album are pretty much unrestrained German thrash, very much like Katzmann's earlier band in execution, with perhaps the warlike bluster of Sodom and Destruction in there as well.

The riffing will immediately ring bells in the memory for The Morning After, only not always at the same blitzing pace. Unfortunately, though it's just not as catchy, and by 1997, a song like 'The Godfather" feels very much like a Slayer knockoff that was too late to the game, at least in the thrust of the verse guitars. There is a fine, old school crunch to the tone that I enjoyed, but the actual patterns are rarely impressive here, even in the relatively busy tracks like "Slaves to the Land of the Free" or "Brothers in Death". It seems like the best writing of the bunch was wedged into the final moments of the album, namely the extremely Tankard bridge/chorus riffing in "Witness" and the cavorting menace of "A Trance of Masses".

Bassist/vocalist Adrian Hahn (also of thrashers Grinder and that band's later power metal incarnation Capricorn) has a singing style between Gerre and some US influences like Tom Araya, Russ from Forbidden or Erik A.K. from Flotsam & Jetsam at his angriest. His performance here is somewhat adequate. He's good at elevating the pitch at the right level to distinguish the chorus sections clearly, but other times he rings monotonously across the barren earth of the guitars. The bass does little to distinguish itself, but occasionally you'll hear a decent fill or two lurking beneath Tunn's storming footwork. What probably nullifies the record the most is just the inability here to captivate through an entire sequence of riffs. One or two will snag your attention and then...nothing important ever happens, or the band will shift to some less inspired guitar line ("Brothers in Death").

It's sad that Katzmann, who wrote all of this music, had to part ways with Tankard, especially if he was going to just create a new entity with such a similar feel to it. He was a tremendous part of his former band's signature sound, and Nemesis just feels like a dispersion of those energies into a less impressive product. The more serious nature of the lyrics is a noted difference (though Tankard was/is not always 100% fucking around about beer), but apparently there was not enough fun inherent to this band that they'd continue beyond the single, obscure. Let's not forget that this arrived at a time when thrash metal of this traditional leaning was long since dead, though many of the major players (like Tankard) were pressing forward. Ultimately, there was just not market enough left to pick up on this album, and it doesn't really deserve the attention anyway, unless you're starved to hear more of Axel's riffing, which seldom delivers here.