Winterfylleth - The Ghost of Heritage (2008) 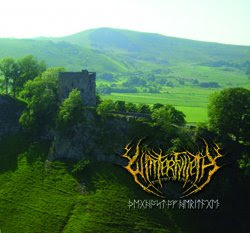 Does the world truly need more pagan black metal of an Anglo-Saxon nature? Considering the small handful of bands active in this field, I'd argue that we really fucking do. And Winterfylleth slides into this niche with ample girth.

The Ghost of Our Heritage is a fairly balanced epic. Lush folk passages fuel your nostalgia, i.e. "The March to Maldon" or
the entry fee to "Guardian of the Herd". But the majority of the material is mid-paced, primal black/folk metal simmering in a crunchy guitar distortion which never detracts from the cultural vibrations. Vocals are the expected snarling variety, yet there are catchy male choral interludes, and not once does the band bite off more mutton than it can chew. Not once did I find myself squirming in the awkward, dorky moments that many so-called 'folk metal' albums proliferate. And I AM a dork, so there is that...

The entire album is good...there is not a weakness to be had. From the slow, spacious thundering of "Forging the Iron of England" to the epic transgressions of "Defending the Realm", I was quite intoxicated with this debut clarion call. The album is a given for fans of Forefather or The Meads of Asphodel, but cultural black metal connoisseurs of any shore will find much to treasure. A rousing and resounding success.

Verdict: Win [8/10] (a victory charge...but in slow motion. They might see you coming...but they'll be too impressed to do much about it.)