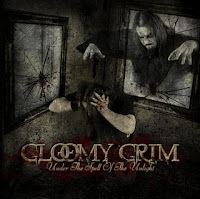 I've been sitting here for a bit, trying to think of music to listen to as tribute to the greatest of modern holidays, and this is my choice. What could go better with Halloween than tongue-in-cheek horror black metal?

Gloomy Grim are, at the simplest level, a symphonic black metal band. In fact, the extremely polished sound on this album is highly reminiscent of Dimmu's latest, In Sorte Diaboli. But wait, wait, come back! This isn't just another synth pomp-laden commercial black metal band riding on Dimmu's coattails. No, not only do Gloomy Grim create intense, driving, and catchy music, but they do so with a combined sense of humour and seriousness.

Under the Spell of the Unlight is an album that tells the story of a haunted house, covering topics ranging from evil mirrors to things that go bump in the night. Here, let's look at some lyrics:

I heard something moving under my bed
raised my feet because i was so scared
i ask if there's someone there
it was too quiet, nothing was heard
suddenly closet opened
i saw something i had never seen before

Kinda goofy, eh? That's the genius of the band, and it permeates every aspect of their music. While Agathon's lyrics mimic classic, almost cliche, horror story tropes, he delivers them with the scathing vitriol of a manifesto against Christ. At the same time, he retains a bit of fun in his tones and (what seems to me) intentionally inconsistent or mispronounced English. He's serious about having fun.

Now take that asthetic to the music itself. Their pummeling black metal, often supported by atmospheric synths, is peppered with the requisite choirs and "creepy" keyboards that come packaged in every box of sympho black metal. But alongside that comes actually ominous ambient sections and samples, not to mention some absolutely evil riffs. Careful attention is payed to every song's dynamic, always keeping the absurd balanced with heartfelt terror.

Under the Spell of the Unlight hearkens back to the days when horror movies had meaning, before they became solely marketed at 13-year-old girls and reduced to inconsistent copy and pasted stories slopping around in a deluge of gore and extremity. Wait, was I talking about movies?