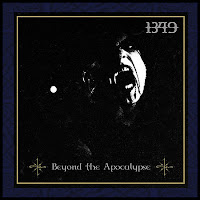 Thank God that your Savior sleeps below the Earth eternally in a fictional repose, for if he was alive and in the world today, and he heard 1349, he would weep tears of blood and mourn the futility of human hope.

Who could blame him? 1349 is the audio equivalent to an entire battalion of World War II tanks rolling over your peasant fucking skull. Take everything you've ever loved about black metal, and now make it 10x faster and more brutal. After the lackluster Chaos Preferred EP they unleashed their excellent debut Liberation, but even that is not this, this is a fucking monster.

Beyond the Apocalypse is generally fast as fuck, and it offers absolutely no apologies. Frost is even more a beast behind the drum set here than in Satyricon. "Chasing Dragons" is your standard spell of destruction, a fast and unforgiving experience in grim perfection, slowing only for a moment to creep you out. How is it possible that something could be even more manic than this? Well, once the title track enters the fray, you'll see that it's certainly possible, with spastic riffing on both guitars and bass under the percussive barrage. These are followed by two of my favorite tracks on the record, "Aiwass Aeon" and the savage, venomous "Necronatalenheten". But don't expect a weak link anywhere, tracks like "Singer of Strange Songs" and "Blood is the Mortar" will murder whatever is left of you. The album simply inspires violence in my soul. I just want to beat my fist into a bloody pulp on whatever is nearby when I hear this.

The album also has this reverberating, grim vibe to the production which truly drives home the blazing riffs and vitriolic Ravn snarl. Just add a heaping dose of Satan, and you've got the very best album released by 1349 yet, even better than the comparable Hellfire. It's just that vile.