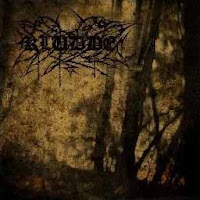 Most bands meshing together black metal and sludge/stoner rock find a depressing medium in which to indulge their doom, but the Belgian Kludde offers something different. This is still very black metal, with the simple edge offered by forefathers Hellhammer, but it's got an almost uplifting, sludge rock awareness. Yes, uplifting. The album rocks the fuck out for most of the tracks, only occasionally slowing to the expected crawl on tunes like "Reglement" and the creepy "Nachtmaer".

The production is fantastic here, while many comparable acts prefer a noisier edge, this is clear and professional, allowing you a balanced glimpse at each lick, each vocal, each percussive hit. If there is one element holding me back from truly enjoying the album, it's the riffs, which are simple and fit well for the style, they just aren't unique enough to hold my interest. In fact, it is when the band diverts from its more rocking side, as in "Het Zout der Mistroost", where some more interesting guitars take place. The vocals are monstrous throughout the entire album.

Still, this is only a debut album. They have a pretty strong style here, and their union of the two forms is a successful one. The production also sets them apart, very well done. With some slightly catchier riffing on their rockers, this will be a force to contend with. I also enjoy some of their lyrical inspiration, rooted in Flemish folktales. Interesting.

I listened through this one with thoughts of reviewing it, but I couldn't quite decide how I felt so I set it aside. I agree with the review, overall it's cool and promising, but it's just not that captivating.