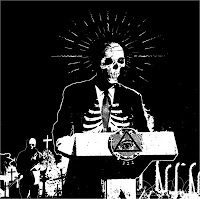 Kill the Client is a Texan grindcore outfit with a social political slant to their lyrics. How is this different than most other grindcore? It's really not, and therein lies my disinterest.

With a genre such as this, in which the point is to pummel the listener with as much chaos as you possibly can, it is CRUCIAL to write interesting, fast songs, or at the very least use a sinister enough production that the riffs you are unconsciously borrowing from every other grind band acquire a new level of meanness.

These guys are somewhat of a technically proficient band, they do write the occasional riff that will have you think 'hey, that's a little unusual for this genre', but the majority of this material is the same grind I've been hearing over and over since Napalm Death in the late 80s. Since they're not using the ripping production of European death/grind acts like Nasum or Rotten Sound, I couldn't even get into that element. As an end result, I sat through a frenetic 18 tracks that I will likely never want to listen to again.

It seems like Kill the Client are some pretty smart dudes with a lot to say, I just wish the music was as interesting as their message. While Cleptocracy is by no means a 'bad' grindcore record, where can I find a good one? I wasn't enamored with their debut Escalation of Hostility, and sadly this isn't my cup of tea either.