Infected Flesh - The Ascension of the Abysmal Aberration (2008) 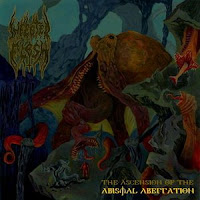 I'll admit I was a sucker for the cover art and the album title, but after a creepy intro, I was sad to discover that the sophomore album from this Spanish gore cult is just as dull as the majority of the brutal, post-Devourment sect of guttural stomp metal.

It would appear this is just a one man band as of this time, so you've got one guy programming all the drums, and performing the instruments and vocals. And while he is able to project a real brutality into the style here, the riffs are just boring chug chug chug hyper chug blast blast chug blast chug. Did you get all that? That's pretty much the pattern here. Unfortunately he forgot to intersperse anything resembling a memorable riff into this pattern.

Thus, tracks with weighty titles like "Catastrophical Synergical Insanity", "The Secrete Nostalgia of Collected Relics" and "A Superior Level of Impious Sadistic Butchery" carry no weight at all, unless you count the weight of people instantly dismissing this to the used bin.

While I've often had issues with drum machines, I really didn't mind it here since everything else is so mediocre it was probably the most exciting part. The vocals are a trade off between a wilder kind of hardcore grind vocal and a super guttural which is really only ever as good as the music it is barfing over.