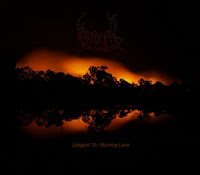 Death/doom's power lies in the ability of the artists to present slow and heavy music with enough atmosphere and doom to keep it interesting. It has the unique task of making slow death metal interesting and emotional, rather than just sounding like the band can't play their instruments very fast.

Burial Stone is not a top-tier project. Rather, almost close to the upper end of the low-tier, in an early 90s sort of way. Located in some vague no-man's land between the less restrained style of dISEMBOWELMENT and more funereal efforts, Burial Stone keep a rather ineffective pace. When the riffs aren't literally oozing boredom, they're hammered into the ground with all the respect of a fencepost. The vocals are kind of interesting, having a croaky growl reminiscent of old death metal experimentation, but often are more grating and irritating than anything.

I have to say, though "Mulo Felelem", "Vezget", and "Szarnyakon" are decent songs, getting the right amount of reverb and crunch to lend some character to the guitars while reigning in the distracting vocal sound to a small extent.

Doesn't save the album.

http://www.myspace.com/burialstone
Posted by is this your life? at 8:21 PM