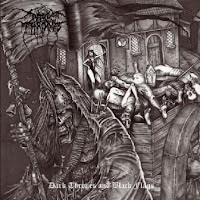 Darkthrone is such a personal favorite of mine that each new album is practically an event, something I anticipate every year or so with baited delirium. Contrary to the narrow views of most black metal mavens, I enjoy just about every 'phase' the band has explored, even their highly debated albums like Plaguewielder or Ravishing Grimness. They have never lacked for integrity or a refined sense of simple, infectious songwriting. Their latest opus continues upon the path of the previous F.O.A.D., a hybrid of early black metal ethics and raw, punk fervor. And it is quite a show, each of its 10 tracks a small piece of perfection.

No, you won't find Transilvanian Hunger or Under a Funeral Moon on this disc. And why the fuck would you want to? They have already achieved the apex of that form, and I for one am excited that they continue to redefine and reinvent their approach. As aforementioned, all of the songs on this album are wonderful. To pick favorites is nigh impossible since I love the placement of every note and every vocal on the album. One might first be thrown off with the rather 'goofy' sound of the clean vocals on track opener "The Winds They Called the Dungeon Shaker", but listen a few more times. It's absolutely fantastic, and re-captures the charisma of early metal and punk when the individual voice was an important force in underground music, rather than the formulaic snarl-by-numbers you hear so often these days.

Both halves of the legendary duo have contributed equally to the songwriting here, and you can almost hear a division between the production of the tracks. And yet, despite this, they all fit wonderfully together into a grim, delicious whole. The influence of Celtic Frost, Bathory and other prototypical staples remains very apparent, yet each track embellishes with something you wouldn't quite expect. The somber melodies which illuminate the second half of "The Winds They Called the Dungeon Shaker". The wild vibes of "Hiking Metal Punks" with its inspiring, NWOBHM guitar solos. The infectious riffing of "Blacksmith of the North". The desolate, thrashing atmosphere of "Launchpad into Nothingness". Just too many moments to choose here.

Lyrically, the album retains the tongue in cheek self-exploration of the state of 'metal' music kick which they've been on for some time now, but not restricted to that. This is a band whose lyrics have always been worth reading, from the worst to the best, and that is a trend which thankfully continues on Dark Thrones and Black Flags.

Yet another masterpiece from the world's greatest black metal band, even if that tag no longer strictly applies to their sound. This is my favorite release from the band since Sardonic Wrath, and one I will probably not cut from my aural rotation until the inevitable follow-up.

Which I will eagerly await, with delirium bordering on frenzy.

Does your metal know what metal really means? I don't fuckin' think so!!!!! Darkthrone forever.