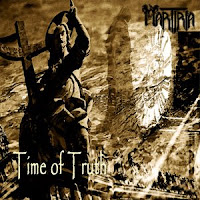 And here is yet another new Italian metal album, the third from power metal lite act Martiria. It's yet another band making use of the synth as a central instrument, yet in this case the guitars actually carry a lot of the tunes, riffing away. The band is listed as singing about 'Christianity' on Metal Archives, and there is a song called "God Knows", but this is never really in excess, most of their lyrics revolve around historical themes.

Since it's the Time for Truth, truth be told, the band is pretty mellow. There isn't a lot of excitement on this record, and that's a shame, I think with a few more raging tracks this would have turned out better. Most of the songs maintain the same energy level, which is to provide lite fare with a lot of melody. If you enjoy laid back power/epic metal, moody but 'pretty', and laden in kind of cheesy synthesizers, this might be for you. I wouldn't qualify this as a good band, but they are certainly no worse than a lot of their peers. I do think the fact they label themselves 'epic' metal is a slight misnomer, you need some more balls to wear that title IMHO.