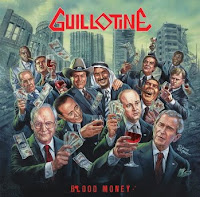 Yet another salvo in the endless bombardment of retro thrash metal of recent years. Okay, maybe that's not quite fair. This is Sweden's Guillotine, a project involving members of other Swede acts Nocturnal Rites and Persuader. They released an album over a decade ago with largely the same intention, and thus officially belong to the 'first wave of retro thrashers'. If that makes sense.

Ah, but to relive the glorious thrashing of bands such as Exodus, Kreator and Destruction! A healthy balance of the Bay Area aesthetics and the more Teutonic aggression of the 80s. To that extent, this album is certainly a rousing statement. The riffs are well conceived and the album is really fucking 'fun'.

It's got a mix of mid-paced thrashers recalling the bonded by blood crowd, i.e. "Insanity" or "Skeleton City", with faster fare aka "Rebellion" or "War". And that just might be the down side of this album, come on with the song titles. I don't care what you are trying to prove, is it so fucking hard to wax creative for a few moments and come up with some cool song titles? I understand this is 'retro', a tribute as much as it is a new expression. But if you've got the tunes, and the drive to produce an album, can't you at least come up with something better than "Liar" for a song name? I mean the chorus for "War" says 'we are commodities of war'. Even that would have been a better song title, "Commodities of War". See what I'm getting at? Lazy.

Aside from this gripe, the album is a lot of fun, so check it out.