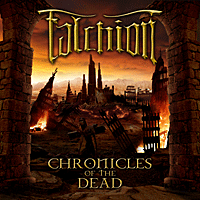 Falchion threw down their gauntlet towards the Finnish melodeath scene with their debut album, but this successor is superior in nearly every department.

If the hallmark of any good melodic death metal album is the catchy factor of its weaving guitar melodies, the brute honesty of its barking vocalist, and the fact I wanted to hit replay almost instantaneously after listening to each track, then we have a victor. I'll go so far as to say I enjoyed this considerably more than the latest offering from Omnium Gatherum, and perhaps even more than the latest albums from Norther and Kalmah. Certainly better than Children of Bodom. It has heart, and it's very well done, from the opening melodic barrage of "Primitive Again" to the folksy step of "Evolution in Reverse". In fact, though I'm labeling this a 'melodic' death metal album, it has a lot of very folkish guitar lines which will appeal to fans of bands like Amorphis and Noumena.

The musicianship is superb. The twin guitars of Juho and Miika have worked overtime to present you with not only pretty amazing leads but a support network of infectious riffing that doesn't stop, ever. Listen to the amazing "Shadows in the Wasteland", one of the best songs of this type since Sentenced released Amok many years ago. It's hard to find any fault, each of the songs is superb and as of this moment I'm going to say this is the best Finnish melodeath of 2008, thus far.