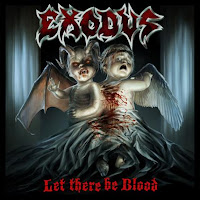 This is the ninth full-length studio album from the Bay Area thrash legends, and the third with latest vocalist Rob Dukes. However, this is NOT a 'new' album of material. It's just a re-recording of Bonded by Blood.

So why would anyone want a remake of a classic like Bonded by Blood? It certainly doesn't need one, so I'm assuming this is just a celebration of sorts of the band's history, yet an attempt to integrate the 'new' in with the old. Unfortunately, this is sub-par in every way to that classic album which tore us a new asshole in 1985, with one possible exception. Dukes isn't particularly to blame here, he still sounds like a metalcore/melodeath singer covering Baloff, but gone are those classic snarls the first two singers were so good at. The main fault is the production, it's just too clean and lacks the raw venom of the original. I mean "A Lesson in Violence" is one of my favorite thrash songs ever...yet if I had heard it hear first, I'm not so sure I'd have ever liked it. The musicianship is still tight, the guitar playing in particular is quite good on the solos, the exception I mentioned earlier.

But enough with the remakes, already. This is a perfect example of why it's not necessary.