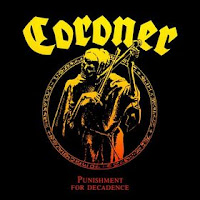 Though the debut R.I.P. was the record to set the stage for this Swiss trio's brand of dark, classically inspired thrash metal, it was Punishment for Decadence which would solidify Coroner as one of the most frighteningly talented and unparalleled thrash acts of the 80s and beyond.

Pushing the limits of technical proficiency, songwriting skill and mesmerizing atmosphere, behold the birth of a legend. The album opens with the complex "Absorbed", a bewildering array of thrashing, dark, melodic riffing beneath Ron Royce's proto death metal vocals (mildly reminiscent of Tom G. Warrior). Even the breakdowns in this song are puzzling and proficient. "Masked Jackal" follows, perhaps the most famous track from this album, due to both its infectious thrashing, shredding and it had also had a video.

Worshipped... by the masses
Leader... with ulterior motives

We haven't even arrived at the meat of the matter yet. "Arc-Light" is an awe-inspiring instrumental piece, loaded in atmosphere and Tommy T. Baron's heavily classical guitar wizardry. With it's sad intro and descending chords, exploding into sheer triumph, "Skeleton On Your Shoulder" is one of the most memorable thrash metal songs I've ever heard. "Sudden Fall" and "Shadow of a Lost Dream" are entirely killer, in particular the latter with its wild bridge after the verses. "The New Breed" is another extremely complex track with its anesthetic riffing and samples. "Voyage to Eternity" closes the album with some amazing leads and atmosphere. There is a cover of Jimmy Hendrix's "Purple Haze" on the CD version, I usually never count it, since it's decent but not much like the originals.

The frightening thing about Coroner isn't just Tommy T. Baron's masterful guitar work, but the bass playing can match it almost note for note...and yes, I've seen him do it live. It's not a joke. The production here may seem average for the 80s, but really allows the music to breath. Lots of reverb, tinny drums, and a lot of atmosphere to the vile vocals. Alongside its follow-up No More Color, this is truly the high point of this amazing band's career. It's a sad thing they are no longer with us and have no real plans to re-unite, unlike every dime and nickel thrash/speed metal band these days. But what they leave us with is a legacy. A legend. A fucking masterpiece. Bands are not made like this anymore. Dark, inspirational, and indisputably one of the most adventurous and complex pieces of thrash metal ever produced on Earth.