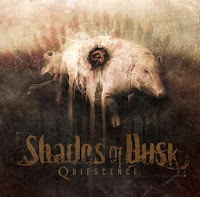 Discovering yet another in a long line of North American melodic death/metalcore hybrids is not typically this exciting, but Shades of Dusk execute this form so well on their sophomore album that I have nothing but admiration for the young Canadian band.

Part of what sets this band apart from so many others is their ability to imbue their breakdowns with the very melodies that make their faster riffs so good. You'll never just have a boring mosh pit breakdown with this band, there is always something else going on. I can say with confidence this is one of those albums you'd define as 'rifftastic', and the majority of the riffs are exceptional for the melodic death field.

The musicianship is a no-brainer. These guys are young and highly proficient yet never resort to wankery. It's pure, kinetic European melodeath worship with a tasteful adaptation to the worthless, 'American' breakdown element that drags so much US metalcore into the shitter. None of the tracks across Quiescence are weak, but a few border on average, whereas I found myself partial to "Inertia...and the Aftermath", "An Urge to Drown", and "The Celebration of Vile Procedures". The production on the album is great, and the vocals of Joffrey Chouinard may not be unique, but they are tempered with enough pure death metal that you won't become annoyed with them.

Fans of the modern wave of melodic death/death metal/deathcore from American shores should look no further to hear a fine example of their style done right. It's got all the groove, aggression and memorable riffing one could hope for in this field. Forget Killswitch Engage. Shadows Fall. Arsis. This band has more talent in a spent condom on their tourbus floor. Even if you are NOT one to usually like this blend of genres, you should check the album out, because it plain rocks.