Lecherous Nocturne - The Age of Miracles Has Passed (2008) 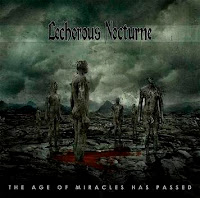 With a line-up culled from members of such death metal luminaries as Nile, Monstrosity and Capharnaum, you know you're in for something seriously brutal and technical. What you didn't expect is frenetic death metal with quite this level of polish and flair. The Age of Miracles has Passed is really, really fucking fast. It's like a drive-by decapitation, but before murder charges can be pressed they've already decapitated the judge, the jury, your police department, your lawyer, and your lawyer's lawyer.

However, unlike many bands who just tear along their warpath with chaotic and technicality at the expense of all else, Lecherous Nocturne actually write some damn good riffs, and are not shy about toning it down ever so slightly to provide an extra level of depth. "We Are As Dust" is a good example of this strategy. The song begins by stripping all the paint and siding off your house like a razor blade whirlwind, but then takes a panoramic view of the destruction in the last minute. Then it fucking kills you.

But wait...in the midst of this modern, technical blowout, they never forget their roots! This is fucking death metal. Listen no further than the intro to "When the Single Shines the Tripled Sun" to hear some great, infectious old school riffing, and then they unleash. There are enough riffs across this record to fill up a dozen albums done by lesser bands, yet you never get lost within this labyrinth, appreciating each new turn or minotaur that presents itself. "Edict of Worms" is brutal. "Death Hurts Only the Living" puts the entire Hate Eternal discography to shame.

This is simply an unbelievable album that should be heard by all fans of technical death metal, it's one of the best examples of such this year. Especially fans of hyperkinetic death like Origin.
It will be the talk of the town for every deathgrind scenester disappointed by the latest Cryptopsy, as it should be. Hats off to you, gentlemen, for a pretty killer and destructive effort, and a clear winner for Unique Leader records.