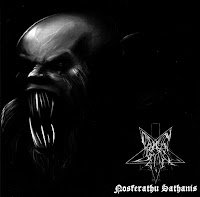 Here's a band we haven't heard from in quite some time.
Paragon Belial is a project of Andreas Classen (Shining) and Marcus Losen (Anti), both also from the band Bethlehem. This is their sophomore album, the first in 12 years. Hordes of the Darklands was a decent 90s black metal effort, and they've once again delivered with Nosferathu Sathanis. Nine tracks that would make Christ weep blood yet again, if he had any left. As a bonus, pick up one of the early copies of the record and you'll get a double digipack with the debut album included.

The snarling nosferatu of the cover art is pretty indicative of the sound here. Bold, bright production, and every song goes right for the throat with ravenous, vampiric incisors. This isn't a band interested in writing complex riffs, they just batter you over the fucking head with simple compositions and let Satan sort you out. I do not have a problem with this. I need some sorting. The title track opens up the first vein, and the rest of the songs feast on your neck. The cover of Hellhammer's "Horus/Aggressor" is well done, the vocalist even shifts it up to use a voice more reminiscent of Tom G. Warrior.

I am actually partial to some of the slower tunes here, like the vile groove of "Abomoth" or the slow crushing avalanche of "Goatspawn". They even have a song called "Grimdozer" of all things. Come on now, and the 'patriotic' album closer "Black Metal United and Strong".

What more do you really need? This isn't the greatest album to ever necrofuel your diabolical engine of hatred, but it's well worth any newsprint maniac's time and effort to track down. Fuck poseurs. Long live Paragon Belial.

A "Hail" to you from the members of Paragon Belial!

Thx a lot for youre good critics, we really appreciate it a lot!!!

-----------------------------------
Still we have to put something right here what was told everybody a little bit wrong! Paragon Belial is not a project but our main band! Bethlehem and Shining are no part of our lives anymore. Only "Anti" is real but a studio band, "Zahgurim" aka "Marcus Losen2 was invited from his friends to do the drumworks. "Bethlehem" used to be a part of "Andras" aka "Andreas Classen" when they brought out the first album called "Dark Metal". After that he left the band and joined "Shining2 for their first output as a singer on "Within deep dark Chambers". That was the only album he did with them. "Zahgurim" only joined "Bethlehem" on the albums "S.U.I.Z.I.D", "Reflektionen auf's Sterben" and "Alles Tot". Cause of several reasons he got kicked after that. Still he is related to "Jürgen Bartsch" (a founder of "Bethlehem") and will maybe play some parts on drums for the new "Bethlehem" recording! Last but not least I want to tell you that we are a 3 piece including our guitarplayer "Ralph" who is (next to "Andras") the soul of the band. Without his guitar tunes we would be nothing.
-----------------------------------