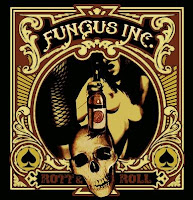 This is a death'n'roll band out of Belgium on their debut. In the case of Fungus Inc., they're a little more 'death' than 'roll', with a solid old school influence to most of the riffing.

There is a LOT of groove here, very simple mosh pit style grooves are essentially trying to carry the album, and failing. These are extremely generic grooves, you've heard all of them a thousand times. The majority of the tracks are really boring. Tongue in cheek lyrics to "Don't Fuck with the Elderly", "Cellulite Monologues", "Shepherd Poon Pie", "I Forgot How to Pee" and "Fake Tits and Broken Hips" are not quite enough to entertain me. "Shepherd Poon Pie" and several of the other tracks even have guest vocals from the legendary Martin van Drunen (Pestilence, Hail of Bullets, Asphyx, etc.)

It's simply not enough. I am about as interested in this as I would be watching a ballet. And not a cool ballet with chainsaws, zombies and strippers, mind ye, I'm talking traditional ballet.