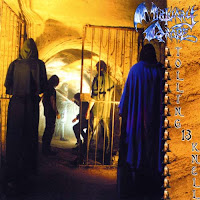 One of the very finest of Italy's truly cult metal acts, Mortuary Drape has been exorcising their morbid brand of occult black and death for over two decades now.

Tolling 13 Knell is their third full-length, released around the turn of the century, and one I've recently gone back to enjoy. A grim atmosphere highlights the production, yet the instruments are fairly clear and present in the mix, almost as if they were jamming in the same room as you. The vocals of 'Wildness Perversion', however, are doused in enough reverb to make them just creepy enough.

I've always liked to think that Mortuary Drape occupied a rather unique spot in metal, that which lies between the horror aesthetic of the great Italian directors (Argento, Fulci, and many others) and the true roots black/death metal of bands like Celtic Frost and Possessed. And when you think about, these guys were already around in those days!

The majority of the tracks here are of good quality, provided you like audible bass guitar, creepy yet simple guitar riffing which recalls the occult thrash metal that later evolved into black and death metal. Occasional psychedelic acoustic guitars are used to round out the vibe here, as in the intro to "Laylah", and the band has a tendency to skirt the edge of doom during slower parts of tracks like "The Last Supper" and "Birth's End". Other tracks are highly atmospheric and original, like the eerie "Not Still Born (The Unborn Plane)". It's a great album overall, and one of their best alongside Secret Sudaria.