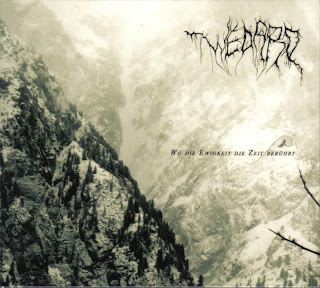 Wedard's Eiskrieg ep from last year made him one of the more promising new dsbm acts in my eyes. Very pleasant material with interesting, somewhat atypical vocals to go with it.

And now, we have a new full-length album. Ok, positive aspects first. Hmm...well, the guitars still have a really nice sound to them from a mixture of soft distortion and spacious reverb. At times they slip close to post-black metal territory with an underlying current of post-rock lending some emotional weight. They're still pretty simple and unimpressive, but they're nice to listen to.

So the guitar sound has improved. Aaand, that's about it. Drums still sound fake, and they're still really boring. The big problem I see here, though, is that the vocals more or less slop all over everything. No longer relegated to the back of the mix, they've been shoved way to the front and given extra heapings of echo. Whereas they used to be distant and pleasant, now they're just a discordant mess disrupting the music. It almost seems like he's going for a Lifelover feel with them, but misses the mark horribly. Combined with the fact that his riffs have never been strong at all, this just isn't all that stimulating.