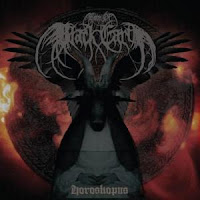 Though this is only my first exposure to this young Seattle band, it's their second album, and they were formed from the remains of another band Teen Cthulhu, who I had heard before. The band is also busy touring and building a following here in the States, so it was high time to hear what all the fuss was about.

The opening track "2160" is a slow intro piece with some simple, doom laden guitars and synths. Once "Death of the Sun" cuts in, you can really get a feel for the band's stripped down style. It's fairly raw, chunky death metal with a few occasional forays into a more upbeat, melodic direction. Unfortunately, while I have no problem with such a style, I just didn't find much here that drew me in. The riffs are tolerable, the album is sufficiently brutal, but I found most of it mired down in kind of boring death metal chug/groove riffs, with some dull keyboards meant to add in 'atmosphere' but adding little. When the band opts towards an even doomier direction ala "Cult of Dagon", it somehow manages to become even less interesting.

I've heard some praise for this band so I'm assuming they must put on some sort of sick live shows, because musically there is very little here of any originality or interest. It doesn't entirely reek of the metalcore stench, but there is that little subtext with the melodeath guitar riffs which sound like a few thousand other US bands of the At the Gates/Black Dahlia Murder variety. Still, the band tastefully moves this in a more direct, simple, brutal direction, so they're not quite a knockoff.