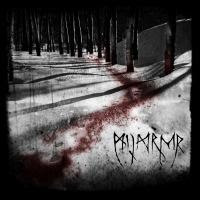 While there is no dearth of German black metal these years,
the scene is continuing to develop, to fill in on many levels. Here we have a debut from a 2-piece performing middling black with a few captivating tracks.

Powered by a drum machine and a cosmically occult lyrical medium, the band offers 11 tracks of atmospheric black. The drum programming does get rather dull, and many of the tracks suffer from a slight case of diminishing, repetitious returns. What I do like is their very use of subtle guitar effects or lines in the mix, for example track like "Der Einsamkeits Vernarbte Idee" is slightly elevated beyond the mediocre due to the wonderful use of atmospheric guitars, that give a shimmering depth to their compositions.

Several of the tracks were rather compelling. "Black Smoking Depths" with its subtle, jazzy intro chords and sparse percussion and excellent mid-paced bridge riff comes instantly to mind as a song I returned to numerous times. "Vom Fluge des Aars" captured a lot of what I enjoyed about raw, 90s melodic black metal and some subtle yet epic chorus bits. But overall the enjoyment wasn't consistent.

If you're a fan of the German scene, Mindrer is undoubtedly a newcomer with some enormous potential. The instruments are mixed rather well for an underground production like this, you won't be straining to hear anything. The vocals are rather average snarling. The songwriting is fair, nothing to write home about but most of the songs have a little shine to them. Fans of Lunar Aurora and Eternity, among others, might just find a worthy effort.