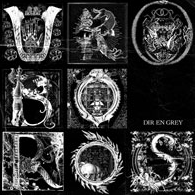 The seventh full length from the popular gothic J-rock band has arrived, and though I've never been a huge fan, they've always offered up something that was at least a little bit different, something mildly interesting. This album is no exception, and in some ways its their most mature album to date.

"Sa Bir" begins the experience with some eerie pianos and strings, before the moody "Vinuskha", a diverse song which ranges from soft, mellow Zeppelin-like acoustics to a raging spaz metal section akin to Mr. Bungle or Faith No More. "Red Soil" is a choppy metallic number, with some bizarre tempos, chugs and guttural vocals. "Doukoku to Sarinu" is another heavy one, with a very interesting progression which made it one of my favorite tunes on the disc. Two of the tracks are including in both English and Japanese versions, the single "Glass Skin" which is almost a powerful atmospheric post-rock piece that constantly reminds me of that metallic edge under the skin waiting to erupt. "Dozing Green" also begins mellow but then has some raging chorus bits with a myriad of vocals. Other highlights are the spastic "Reiketsu Nariseba" which is like a circus nu-black metal hybrid, and the creepy gothic rock of "Bugaboo".

There are some crappy nu-metal groove elements still to be had in the band's sound, but for the most part this album comes off rather original, if you could imagine a cross between Faith No More and Sigh then you might not be far from the truth, though this band isn't quite at that level of songwriting talent just yet.

Still, they are veterans of their scene, have always done things a little differently than the rest of the big J-rockers, and this is perhaps their best overall record to date. If you enjoyed their previous albums then this will probably blow you away. As far as myself, the positive qualities simply aren't in enough quantity for me to truly appreciate it.

Dir En Grey have always been intriguing yet inconsistent. Seems like every weeaboo girl I meet loves them, haha.