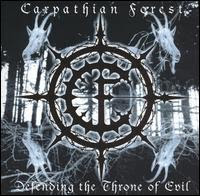 Carpathian Forest has always stood out among the Norse black metal scene because of their uncanny self awareness. There is of course their propensity to create some of the coldest, most evil black metal ever to grind its bones and saunter forth from a crypt or cavern, but you get the feeling that just about everything you find amusing about them, they'd be laughing alongside you with a beer and a grim smile. And yet, somehow, they avoid becoming a caricature of the form.

Regardless, this is an extremely impressive band, releasing masterpiece after near masterpiece. Defending the Throne of Evil is their fourth long-player, and no exception to the dynasty. There are some songs here which I have not stopped listening to in the five years since the album dropped. "The Well of All Human Tears" is not only one of the best song titles ever in this genre, but it's also one of the best songs, with that doom laden trudge towards oblivion kicking off at around the 1:00 minute mark. Yes, you know the one I'm talking about. They retain their ability to simplify some of their riffing into a more rock structure, but never losing the black metal edge. So much to love here. "It's Darker Than You Think" with its melodic bridge and great lyrics. "Ancient Spirits of the Underworld" and "Skjend Hans Lik" are two of the more straightforward, metal tunes.

The album also has its experimental edge. "Cold Murderous Music" is actually a trip hop number with a saxophone following Nattefrost's amazingly grim vocals. He's still got one of the best tones in all black metal. There is "The Old House on the Hill", a piano horror piece, also featuring his vocals.

It's practically impossible to go wrong with this band, and while Defending the Throne of Evil might not be their very best material, it certainly comes close and even features some of their best tracks. This means you must have it. Why are you still here?

that's what I missed on Fuck You All!!! - the weird experimental side of CF. I'd love to see them do a side album or bonus disc of covers and saxophone music.

It helps that everything they do is goddam amazing.